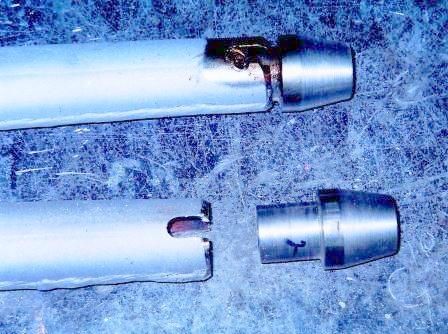 In this installment, Bob Hamilton covers not only the split wishbone bung welding but also shows how to use a clever home-built jig to ensure you properly align the urethane bushing that will connect to the split wishbone frame brackets and is screwed into the wishbone bung. Just another example of some of the time-and trouble saving tips and tricks he shares in the comprehensive StreetRod 101 DVD Library.

“Remember that I am using stock front wishbones for that old school look. I cut the ends just past the “ U “ that connects both sides of the one piece, stock wishbone and then I cut a slot on both sides so that I could get more weld between the wishbone and the wishbone bung. I used a 3/8ths end mill to accomplish this on the milling machine. I could have used a 3/8ths drill and then a disc cutter to cut the slot. I’ve done this in the past and it worked just fine.” “It doesn’t have to be pretty because the weld will fill it in. The idea here is to gain some additional strength. The upper wishbone bung has been tacked in place on both sides and is ready for final weld when ready.”

“This picture shows the makings and the jig that I built that will create the urethane bushing assembly less the bushing itself. Starting from left to right. I cut pieces of 1 3/8ths OD x 1 1/8 ID seamless tubing making them 1 inch wide. I then purchased 5/8ths x 18 grade 8 bolts x 2 inches long. This next step is not necessary but I like to turn the sharp edges or point off the head of the bolt. It just makes the welding and finishing a little easier. Before I had access to a lathe, I just used the head the way it was. The fixture or jig is home built and is used to center the bolt on the sleeve for the bushing assembly. The sleeve uses a bushing to hold and center the sleeve in the fixture. The long piece of 7/8ths seamless tubing is used to hold the bolt in place in the center, as determined by the two pieces of square tubing welded to the angle iron that is held by the vise.” “Here the sleeve and the bolt are in position for the tacking operation.” “This picture shows the whole thing put together and held in the vise for tacking. I will put a short tack on this side – remove the bolt , slide the assembly down and away from the ears , remove the centering bushing, rotate the assemble 180 degrees reinstall and tack the other side. Remove and final weld when ready.”

I must confess that ever so often I will watch Bob’s DVDs again, not only to get good information on how to address a particular part of my own build but also I find that the more I watch and listen to Bob the more likely I am to pick up his organized thought processes that are so important in planning and building a street rod the right way. If you don’t have them already, take a look at the incredible range of content contained in the helpful StreetRod 101 DVD Library which we make available through our sister site, StreetRodPlans.com.

As long as you keep coming back, we’ll continue this cool 1927 T roadster series, so see you again soon.