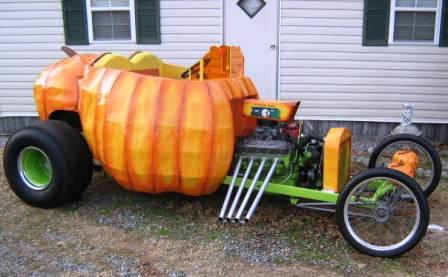 With Halloween tonight, it’s time to revive the most fun T-Bucket Halloween Hot Rod post we have. 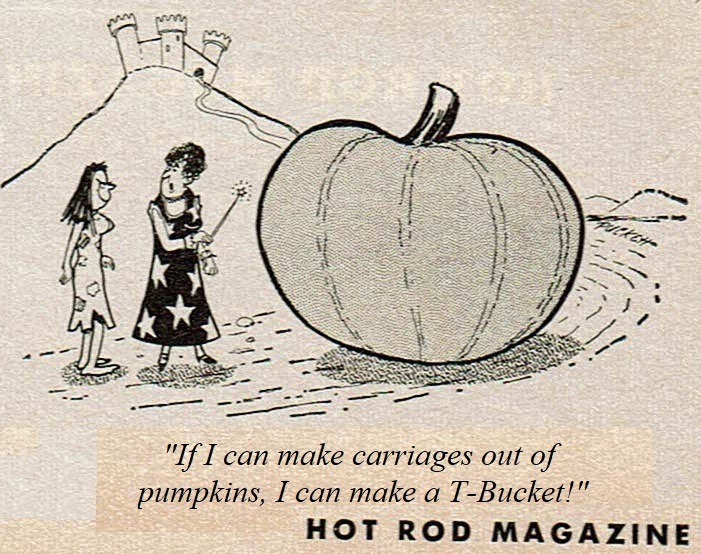 The old joke goes, “Doctor, doctor, I’m so ugly. What can I do about it?
Hire yourself out for Halloween parties.” (Originally posted January 15, 2011) OK, guys and gals. If you’ve always wanted to be the star of the Halloween Parade, scare small children, incite chasing dogs and draw gape-mouthed stares at every car show and cruise you attend then you missed your chance when this Halloween hot rod was listed on eBay with a “buy it now” for only twelve grand!? In all fairness, either this Halloween hot rod was inspired by some creative artwork or vice-versa. With its Jack-O-Lantern headlights, this T-Bucket based (check out the T grille shell) Halloween hot rod curiosity features a “one of a kind” (no duh) fiberglass body and if there was ever a car to win the Shriner’s Choice Award, this is it — and it did. While the eBay listing was titled as a “1927 Ford Model T-Bucket”, I’d say it’s more ’23 based but arguing that seems a moot point. Powered by a 302 Ford, I have to wonder why the builder didn’t choose the Chevy small block, since they’re pumpkin orange to begin with! 😉 The orange-tinted, pumpkin-shaped windshield is a creative touch but that dash features a 160 mph speedo, which presents its own spooky visions given the lack of front brakes. And, yes, it’s just as frightening-looking going as coming. 1/21/11 Update: Looks like the highest bid was almost $10k short of the $12k asking price, so it was a no sale. But if you’re a Halloween fan, don’t despair because the Pumpkin T was relisted on eBay and may have sold. If you know its whereabouts, please let us know. We’d love to expand this post with more info on how it was built, how it rides, and what this Halloween hot rod is up to this spooky season.

10/27/15 Update: Just because we like to keep improving on our past posts we wanted to add another Halloween Hot Rod that might be more in line with you C-Cab fans. Dig that chromed tubular front axle with disc brakes and the vertical steering column in the narrow cab. And it is a true hot rod, judging by the use of a Corvette independent rear suspension. If someone wanted to build something like this it wouldn’t be that hard to do because they could construct the custom fiberglass body themselves using the techniques covered in the cool “Build a Custom Fiberglass Body at Home” DVD set at our sister site, HotRodPlans.com. This one can be found at Pumpkintown USA in East Hampton, CT.