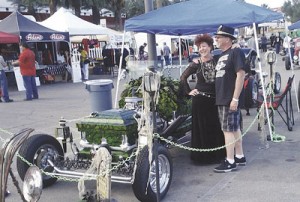 Steve and Carol Moraco’s “Wake TheDead,” is a car made from a real coffin (think “Drag-ula,” the casket auto from “The Munsters” TV series, only cooler) with a Shelby Series 1 engine carry 320 horses. The creation caused such a stir that it captured Best of Show in a recent prestigious Las Vegas car show and was featured in a spread in Rebel Rods magazine. (Submitted photo)