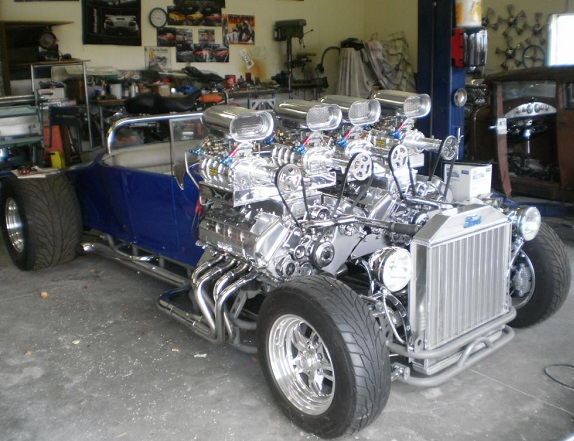 After Gordon Tronson’s awesome “Double Trouble” T appeared on the popular History Channel TV series “Counting Cars” last night (in the episode entitled “Dream On”), we wanted to repost our earlier story (December 16, 2010) on Gordon’s skillful home build for those fans who would like to know more about this truly one-of-a-kind 1927 T roadster. You may have noticed that Double Trouble was on an earlier episode of Counting Cars (2012) when it featured two engines and two blowers. This was on season 1 of Counting Cars in episode 2, which was titled “Buggin’ Out” in case you’re checking your channel guide. So, what drives a transplanted New Zealand hot rodder to take on scratch building a 1927 T roadster with not one, but two, all aluminum Ford 4.6L DOHC modular V8’s? Must be the Henderson, Nevada heat that overcame Gordon Tronson when, without the aid of any drawing, let alone blueprint, he started laying out the components on his garage floor. Gordon’s next step was manually bending many yards of 1.5 inch tubing and welding up the frame for his creation. Next, he shoved a Jaguar independent rear suspension with inboard disc brakes into place. In case you’re wondering the two mills are mated together with an innovative high-tech Gates Poly Chain Carbon belt and sprocket drive into a beefed Ford C5 transmission. Up front, Gordon built his own independent front suspension employing 90s Corvette spindles and disc brakes and for good measure chose to steer it with a rack and pinion unit from a sand dragster. With a few years of high end hot rod fabrication under his belt, Gordon’s eye for and execution of detail are everywhere in Double Trouble’s construction.

Of course, Gordon wasn’t going to settle for just the power of two engines, so he decided on custom made blower manifolds for a pair of B&M superchargers. And the end result is awesome! I’ve yet to see a twin-engine, side-by-side hot rod where everything goes together so beautifully. Of course, it’s not just all engineering either, with a deep Candy Apple Blue paint job and liberal chrome accents setting off the beautiful powder-coated frame. From the rear, the super wide Billet Specialties wheels wrapped with Mickey Thompson tires are a sight to behold that perfectly complement the proportions of the 1927 T body. I’m a bit of a radiator and grille shell snob, but when it comes to cooling two engines in the Nevada desert this custom made Griffin unit does the job with style. And for those who might think those are dummy engines and this is something that’s pushed into and out of a trailer, take a look at the video.

You can check out more Double Trouble photos and info here>

Being a strong believer in more is better, Gordon has taken Double Trouble to the next level. It now sports 4 superchargers! Be sure to catch the “Dream On” episode of popular TV series Counting Cars to see more.