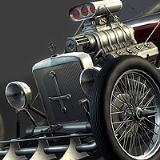 I’m fascinated by the world of possibilities presented by computer-generated imagery (CGI) and believe it’s potential benefit in hot rod building is still untapped. I was really blown away recently when I stumbled upon the work of a very talented young Belgian 3D and technical artist named Laurens Corijn. Laurens had observed that in many car-related video games the hot rods left something to be desired in terms of their look of authenticity. You know, somebody who was more an artist than a car person’s depiction of a generic hot rod. So, Laurens set about doing quite a bit of research on the subject and, fortunately for us, found the T-Bucket to be an ideal hot rod vehicle that would be the recipient of his masterful digital illustration talents. After his initial research, he quickly sketched out on paper the T-Bucket he would create in his imagery, which was a composite of a variety of those that inspired him.

I think you’ll find the above introductory video by Laurens a great summary of the research he went through. (Be prepared for a brief commercial at the beginning and end, but that’s the price we pay for free video access these days). Then he sat down at his computer and began working his magic. The reason that the final product looks so realistic is that each component is created from scratch and the final image is “built” pretty much just as you would build a real T-Bucket. While he makes it look easy, keep in mind that Laurens is a lecturer in 3D at University College of West-Flanders and also a contract artist for Liquid Development, a leading source of computer-generated imagery for the games and entertainment industries. To get a better idea of how this is done, check out the video below. However, unless you’re already into CGI you’ll get lost pretty fast, but it’s fascinating to watch.

Laurens’ 3D T-Bucket imagery was featured in 3DCreative Magazine’s february 2010 issue, and if you’d like to totally immerse yourself in this project the incredibly detailed “Making Of” series can be followed at CgTuts+ which features 9 videos covering the complete construction of this 3D T-Bucket by Laurens.

When it comes to hot rodding, tradition is great but technology can’t be overlooked. I don’t know about you, but my short exposure to this high tech hot rod building has widened my perspective and given me a much greater appreciation for 3D computer-generated imagery.