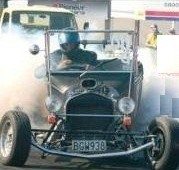 As previously noted, I’m a big fan of New Zealand and Australian T-Buckets because they seem to put as much emphasis on actual performance as looks. So, it comes as no surprise that a T-Bucket Challenge event has been added to the April 3, 2011 Nostalgia Drags New Zealand, hosted by Bay Rodders Tauranga at the Fram Autolite Dragway at Meremere. As recently noted on the New Zealand Hot Rod Magazine forum, “Bay Rodders is excited to announce a new Class for 2011 – The “T-Bucket Challenge” sponsored by Herb Morgan Tyres with $500 prize money up for grabs. This class as other classes racing will be DYO (dial you own); safety rules will apply as per rule book. Check out the Bay Rodders website for more information and online registrations. As a special feature at lunchtime the crowd will be able to enjoy the “Bucket Grand Parade” so they can appreciate these great cars”. Today’s Bay of Plenty Times story about the event, noted that regular Nostalgia Drags visitor Marcus Paige is bringing two T-Buckets from Australia and he remarked, “The Hot Rod internet forums have gone berserk about T-Buckets recently so we’re hoping for a big turnout.” What’s even more exciting is that this is going to be a double-header weekend, with New Zealand Hot Rod Magazine presenting its New Zealand Hot Rod Association (NZHRA) Club Champs competition on Saturday, April 2, the day before the Nostalgia Drags and the T-Bucket challenge. I’m particularly fond of these Kiwi T-Buckets because most of them are fully street equipped and are also driven on the street. By the way, the T pictured below is one of my personal favorites because it’s Y-block Ford powered and has been known to produce wheelies on the street. Maybe I’ll be luck enough to receive enough information so I can do a story on it someday (hint). By the way, the Bay Rodders Tauranga was formed back in 1966 and you’ve just gotta love a car club that uses a T-Bucket as its logo (see below)! We’re also putting out the call now for a New Zealand volunteer correspondent who can send us some pics (both drags and show) from the event along with other details our T-Bucket loving followers will want to know. If you’re up to a challenge where the only reward is global recognition and appreciation of your efforts, just drop us an email using the Contact form. Here’s to a fun-filled T-Bucket event!