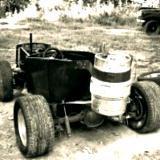 While keeping up on what’s going on in the T-Bucket world, I was recently amused to find a new article titled, “How to Build a T-Bucket on a Budget” that was posted on the eHow website. At first, I thought it was a reference to Chester Greenhalgh’s book, which went under the title, “How to Build a T-Bucket Roadster on a Budget” when it was issued as a trade paperback. It wasn’t, though. Rather, it was a short “how to” article.

But first, if you’re not familiar with eHow and its parent firm, Demand Media, here’s how they were described by Barbara Ortutay and Michael Liedtke of Associated Press in a recent story: “Demand Media, based in Santa Monica, assigns roughly 13,000 freelance writers to produce stories about frequently searched topics and then sells ads alongside the content at its own websites, including eHow.com and Livestrong.com, and about 375 Internet other destinations operated by its partners. Articles range from the likes of ‘How to Tie Shoelaces’ to ‘How to Bake a Potato’ and more.”

Well, the first paragraph of the article drew me in with, “The T-bucket is a popular choice among ‘hot rodders’ for many reasons. It’s a small car that is very versatile; the market for these cars is huge; you don’t have to spend a lot of money to build one; and it has the classic look of a hot rod.” I was nodding my head in agreement to that and kept on reading.

Then it listed a very short 6-step plan which can be summarized as:

And that was it — all in less than a thousand words, and the closest anything came to directly referencing a T-Bucket was a suggestion to search on the Internet for “ford model t kit cars”. And that’s what brought to mind the aphorism, “a little bit of knowledge is a dangerous thing” (or, if you’re texting, ALBOKIADT).

While the eHow writer didn’t really suggest anything dangerous, the article was so lacking in information that anybody who chose to follow it would be truly left to their own devices in constructing a hot rod that they might drive on the road. Maybe that’s why Chester Greenhalgh’s “How to Build a T-Bucket Roadster for Under $3000“ was called “the most complete hot rod how-to ever written”.

After all, Chester’s eBook contains 250+ pages, 400+ photos, templates, diagrams and illustrations revealing every detail of how to easily build a T-Bucket roadster from everyday materials and junkyard parts … or new ones, if you insist. The eHow article had one stock photo of a little boy looking at a Model T. Anyway, like their how-to on “How to Wash Human Hair” (no, I’m not kidding — just click the link) the T-Bucket article was doing it’s job for eHow and Demand Media because right next to it were ads for auto computers, Ford cars, aerial lift trucks (also called bucket trucks — get it) and the Edmunds auto guide, among others. It’s our firm belief that knowledge is power and the more you have the better you’ll be. Likewise, the safer, better looking T-Bucket hot rod you’ll be able to build. You probably don’t want to end up building a T-Bucket abomination like the one pictured here; so, if you haven’t already dig deep for that $18.95 and you’ll be on your way to successful budget T-Bucket building.