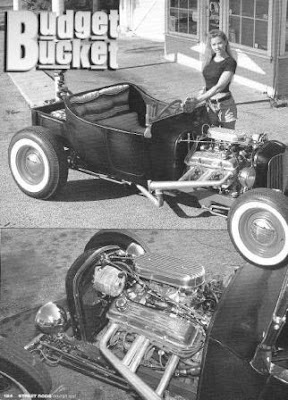 My July, 2010 edition of Rod & Custom was waiting for me with the regular mail when I arrived home last night (I know, it’s not yet May and the July issue arrives? I’ll let the magazine industry explain that one). So, I start flipping through it and my eyes immediately are drawn to a familiar image on Rob Fortier’s editorial page. Then I read the highlighted quote, “Even though I’d built a fiberglass-bodied T-Bucket back in 1995, the thought of doing ‘glass cars back then didn’t really appeal to me.”

Now, I like the direction in which Rob has taken this previously rather vulnerable magazine. And I’m also a big fan after seeing Rob exchange some pleasantries with Chester Greenhalgh on the HAMB and especially so since he must have seen it possibly worthwhile to mention Chester’s T-Bucket eBook on the R&C website. In reading Rob’s fine editorial, he makes the pragmatic point that in this day and age (especially given the past couple years) that we’ve all pretty much had to reformulate some of our favorite dreams, whether they be that around the world trip, the summer cottage in the mountains or, God forbid, that steel ’32 3-window coupe we thought we’d build or buy someday soon.

Further to Rob’s point, the days of turning up ones’ nose at a fiberglass T-Bucket may be rapidly diminishing for a growing number of the formerly hot rod elite who are now facing the realities of their checkbooks, home equity and 401k’s. Rob closes his editorial with the cliff-hanger comment, “To see how flexible I have really become, I’m toying with the idea of taking on a new project — a fiberglass-bodied one at that!” He’s done it before with the old Street Rods magazine “Budget Bucket”. We can only hope …

P.S. Rob, if you’d like to brush up on your T-Bucket scratch-building knowledge and how to get the most bang for the buck with a downsized wallet, let us know and we’ll get that complimentary “editorial review” copy of Chester’s eBook in your hands pronto! 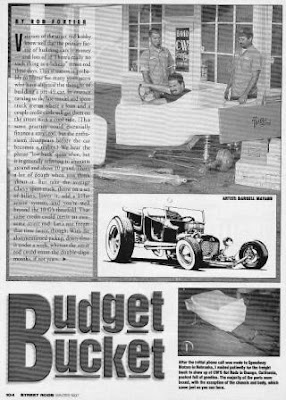 UPDATE: All good things take time. So, we’re finally able to say that Rob and ROD & CUSTOM have formally announced their T-Bucket project car, which we will be looking forward to following with much interest.