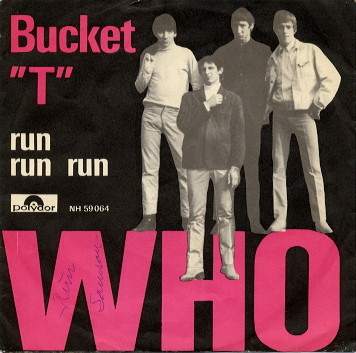 Just to show what an important element of popular culture the T-Bucket became, you need look no further than the three artists who recorded this dopey ditty: Jan & Dean, The Who and Ronny and the Daytonas.

I must say that I find the cover version of this song done by The Who to be rather irritating. The original Jan & Dean version is at least made more palatable by being in the “surf music” genre.

Excrutiating to listen to, but of some nostalgic interest.

I was right, too, she’s first in her class
There’s nothing on the freeway she don’t pass
All the girls want to take a ride with me
But there’s only one seat in my Bucket T

— On second thought, maybe not.

Hard to imagine that a simple ditty like this would be recorded by three name groups, but in the 60s this genre of surf and car music was really stirred up by the Beach Boys huge success with 409. So, it only makes sense that the group that had a big hit with Little GTO would offer up their own version, which of the three is my favorite. Listen for the kind of “surfin’ bird” sounds near the end.