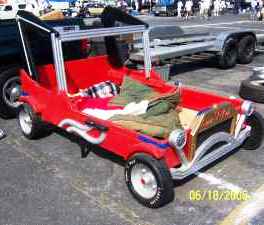 In the 1970s, waterbed stores were popping up everywhere as their popularity spread from the hippie community to suburbanites seeking more excitement in their love life, as well as the over-50 crowd looking for a better night’s sleep. So, why not do something for Junior that tied in with the exciting T-Bucket hot rod phenomenon? Thus was born the “Super T Rod” waterbed. I recently saw one of these on CraigsList for $450. While maybe not the bext execution of a T-Bucket, what can you expect from a wooden, straight-sided construction. It would still make a cool bedroom addition for some lucky youngster. By the way, the modern waterbed was created by Charles Hall in 1968, while he was design student at San Francisco State University in California. Hall set out to create the world’s most comfortable chair. Taking his cue from the very popular bean bag chairs of the time, Hall filled a large inflatible vinyl bag with 300 pounds of liquid corn starch and titled his creation “the Incredible Creeping Chair.” Unfortunately, he found that when he sat in it, he tended to sink so far into the chair that he felt he was being swallowed by it. He next tried to replace the liquid starch with Jell-O ™ which soon became lumpy and uncomfortable. Finally he abandoned his idea to develop a chair and filled a rectangular piece of vinyl with water and called his creation “the water bed” (so-named after the water-filled mattresses used for over 100 years for invalids).