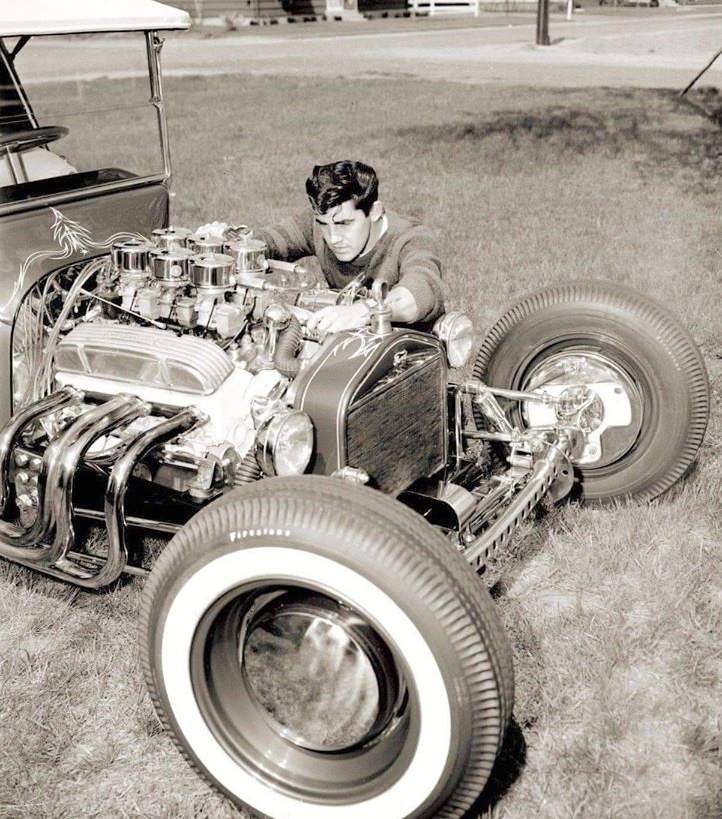 You could say that the Norman Letendre traditional T-Bucket and the Bill Strickland T-Bucket roadster are birds of a feather. They both evidence a strong Tommy Ivo T-Bucket influence, were built around the same time and are both New England T-Buckets.

Norman Letendre of Ludlow, MA took inspiration from TV Tommy Ivo’s T-Bucket roadster when he built his own in a four year project starting in the late 1950s, with somewhat similar maroon paint finish and white interior, but with a Chevy instead of a Buick engine.

An immediate success, Norman’s jaunty T roadster captured the Best in Show award at the 1961 Danbury Modifiers show in Connecticut.

Norman chose a 1958 Chevy 283 engine and upped its horsepower potential and looks aplenty with a six deuce Weiand manifold and set things in motion to the beat of the ever-popular in the day Duntov cam.

And like Ivo, he had the Chevy small block painted in a pristine white which was very dramatic at a time when most cars were still equipped with road draft tubes that left engines a black, greasy mess.

Taking another TV Tommy clue, Norman added nicely chromed exhaust headers custom fabricated in the same general configuration as Ivo had used. In addition, he employed the same Grabowski and Ivo early four-bar radius rod arrangement, mounting to the frame with a bolted on chromed plate.

As another recognition of the perfection that Ivo had wrought, the Norman Letendre traditional T-Bucket went with white walls, steelies and baby moons. For front tires he chose Firestone 5.90 x 15’s with Bruce slicks at the rear.

Of course, the T grille shell wouldn’t be complete without the winged Motometer. It’s also interesting to note that when the Norman Letendre Traditional T-Bucket was first shown it was identified as a 1917 Model T, but that evolved to become 1920, a better fit for the name chosen for the T, the “Roaring ’20”.

For front suspension on his T roadster Norman duplicated what Norm Grabowski and Tommy Ivo had done with a V8-60 tubular axle, but applied his own creativity by adding hot rod lightening holes. That drilled tubular axle became the trademark of the Norman Letendre traditional T-Bucket!

From the rear, the Norman Letendre traditional T-Bucket uses a medium arch transverse spring, as opposed to the high arch used by Grabowski. Norman also fashioned a unique nerf bar arrangement that encompassed a pair of 1959 Cadillac taillights.

From the get-go Norm’s T roadster was a hit with show judges and audiences alike and in 1962 he was averaging over two trophies per show.

It can’t be emphasize enough what a dramatic eye-catching look Norm’s T presented with its burgundy paint so nicely complemented by the white upholstery, top, engine block, whitewalls and some truly beautiful white pinstriping.

Norm’s admiration of the Tommy Ivo T was faithfully carried to the interior where he created a tunneled dash panel almost identical to Ivo’s and used the same style Bell 3-spoke steering wheel. And the tall shifter was attached to the Grabowski and Ivo traditional Cad LaSalle transmission.

Despite all its beautiful detail the one thing I could never figure out on Norm’s T was the plain slot cut in the cowl for the drag link. Why he didn’t fashion a scoop to cover that like Ivo did is a mystery.

Although the photo above is terrible, it shows that by 1963 the Norman Letendre T-Bucket roadster was being used as a crowd draw for shows as in the clipping from the April 7, 1963 New York Daily News.

In the June, 1964 issue of Hot Rod Magazine Norman Letendre listed his traditional T-Bucket for sale. The photo accompanying the ad was from a car show and some additions had been made to the T, no doubt to capture additional show points. The tiny photo displayed the addition of cowl lamps, as well as mag wheels.

What happened to the Norman Letendre traditional T-Bucket after 1964 is a mystery, but I understand that sometime around 1992 or ’93 then Massachusetts-based hot rod builder Steve Centracchio discovered it in Maine.

And like most early T-Bucket hot rods, it had been changed a lot in an effort to stay contemporary. According to Steve, it had been repainted black, had 12-spoke American Racing spindle mounts on the front, aluminum slot wheels on the rear, still sported the later added T cowl lamps, but the LaSalle gearbox had been replaced by a Muncie 4-speed. It even had a fully chromed frame.

Fortunately, the car was brought back to its original Norman Letendre traditional T-Bucket “Roaring 20” glory and the original paint color was able to be matched from overspray under the dash.

This T-Bucket’s looks and appeal are timeless. Old timers and neophytes are equally drawn to it and that says a lot about the traditional T-Bucket styling that Tommy Ivo pioneered, Norman Letendre enterpreted for his own taste and Steve Centracchio helped bring back to life.

By the way, we’d love to hear and see more from the current owner because it’s a real treasure.