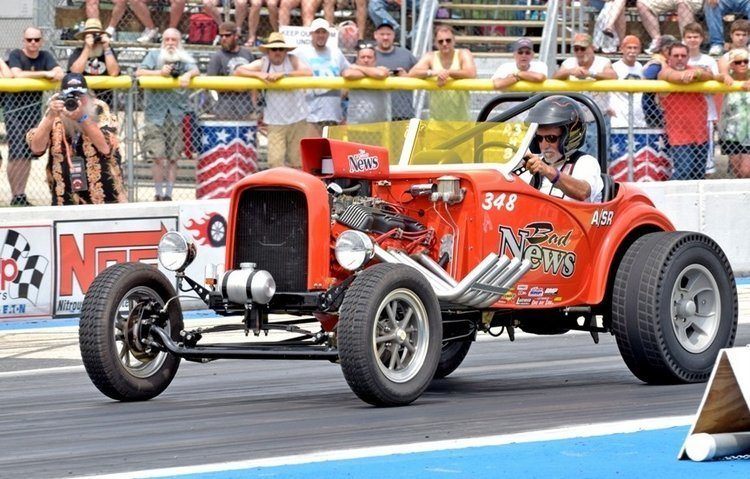 After completing the story this week on Art Tardiville’s T-Bucket chassis’d Austin Bantam coupe, I realized things wouldn’t be complete without sharing my own Austin Bantam roadster fascination and inspiration. I became a huge T-Bucket fan in 1957 after seeing Norm Grabowski’s T in Life magazine, but the only T-Buckets I saw for the next 10 years were in magazines. Growing up in Kentucky, hot rod roadsters were scarce in a small town. The local focus was drag racing. Street rods were rare. Coupes were the thing. The closest I got to satisfying my T-Bucket cravings up close and personal back then was with an Austin Bantam roadster built for drag racing.

At the time, the fiberglass Austin Bantam roadster body was the hot ticket for building an Altered. It was lighter than a T-Bucket and simpler because there was no turtle deck or pickup bed involved. Bantam Altereds were heating up and companies like Roadster Engineering, started by Bud Lang of Cal Automotive and Car Craft fame were serving the market.

In the mid-1960s a local drag racer named David Lee Green decided to move up from Gas Coupes into the realm of Altered competition, which paid better if you won Middle Eliminator at the area drag strips. Dave set about building a fiberglass bodied Austin Bantam roadster on a fabricated steel tubing frame in his home garage. Powered by a 301 cubic inch Chevy, it was designed to run as a B/Altered. To my delight, Dave was kind enough to let a curious teen drop by his garage from time to time to see how his Bantam Altered came about.

Dave built his Altered chassis in a fashion very similar to what was done with T-Buckets back then, with a transverse sprung straight front axle and rear quarter elliptic springs and ladder bars for excellent traction. Seeing his bare-bones Altered roadster under construction gave me my first personal insight into the simple chassis construction techniques employed in T-Buckets, which I’d only seen in magazines before.

From the get-go, Dave Green’s B/Altered Bantam was a wheelstanding spectacle that regularly won Middle Eliminator locally and later, with Enderle fuel injection, it dominated regionally.

I recall Dave and a friend regularly towing the Bantam back the return road after runs with Dave’s oldest son, David, a mere youngster at the time, sitting in and steering the roadster on it’s 1/8th mile return trip. Young David Green would later move into NASCAR where he would finish runner-up to Jeff Gordon for Rookie of the Year and then become 1994 Busch Series Champion and 1996 Busch Series Most Popular Driver. His younger brother, Mark Green, also enjoyed a NASCAR driving career, while youngest of Dave’s sons, Jeff Green, would become 2000 NASCAR Busch Series Champion and 2003 Daytona 500 pole winner

Sadly, last year Dave Green passed away. Recently, however, I was delighted to see that he will be one of the 2016 inductees into the Kentucky Motorsports Hall of Fame in recognition of his racing and life knowledge which propelled his three sons to their own success in motorsports. Around the same time Dave Green was enjoying success with his Bantam Altered, the March, 1966 issue of Hot Rod magazine came out with an eye-opening feature on Ron Maxwell‘s 1932 Austin Bantam roadster. With its 92 inch wheelbase, 12-spoke front rims, rear Firestone slicks and cross-rammed Chevy small block it certainly had the Altered look. But, it also had a windshield, headlights and license plates. And the story pointed out that Ron and his wife had driven this Austin Bantam roadster the 120+ miles from their home in Salt Lake City to the Bonneville Salt Flats, where it had been photographed by Eric Rickman. While I was very much focused on the chassis construction of Dave Green’s Bantam, now my thoughts turned to, “could the Austin Bantam roadster be built as something different in the T-Bucket realm?” So, let’s look at how the dimensions of the T-Bucket body compare and contrast with the Austin Bantam roadster.

There’s no getting around it. The Austin Bantam roadster is tiny. This illustration from back in the day compares it to a full size Buick touring car. Remember, it was the first American compact car. One nice feature of fiberglass Bantam roadster bodies is that they do not include the ugly firewall extension that was covered by the hood on the stock Austins.

The above illustration shows the extension provides a bit more leg room, but not a lot and it tends more to take away from the appearance. So, with my past appreciation for both strip and street Austin Bantam roadsters you can imagine how great it was for me to see this very cool Bantam of Fred Desch at the Meltdown Drags. With its short wheelbase, rollbar and wheel/tire combination it was very reminiscent of Dave Green’s Bantam Altered from 50 years ago. The 348 cubic inch Chevy W motor was equally nostalgic. And Fred had added necessary street equipment like headlights, radiator and even front brakes. Around back, the pushbar and drag chute were complemented by brake lights and a license plate. Looking forward you can even see it has a windshield with nostalgic tint and a rear view mirror. Hey, this is another street driven Austin Bantam roadster. Inside, it was even more exciting to see 3 pedals and a Hurst shifter. Fred had made clever use of an accessory gauge panel to make up for the bare bones Bantam body not having a dash. I was so taken with this Bantam that I can ignore the fact it wouldn’t have run A/Street Roadster back in the day due to it not having front fenders and headers with collectors rather than zoomies. But who cares today. It’s an awesome Bantam! And not just awesome in the looks department, because it can get down the strip nicely. And, shades of the late Dave Green, the little Austin even gets the front wheels up on launch! It just doesn’t get any better.

Another detail I really liked was the fabricated windshield frame. That’s one element that was always a problem for anyone building an Austin roadster for the street. You’ll also note the newspaper box intake scoop, which no doubt helps with Fred’s naming of the Bantam as “Bad News”.

The cute little Bantam fiberglass bodies are still being produced by Speedway Motors and others. Speedway Motors is the pioneer in producing fiberglass Austin Bantam roadster bodies, as you’ll note from the above 1963 publication. Look closely and you’ll see that they originally produced the bodies with the stock firewall extension, which was no doubt eliminated when customers wanted the shortest, lightest roadster body possible for competition. Sure, you’ll have to fiberglass in a floor and probably add some body stiffening wood ribs but if you buy a copy of Chester’s “How to Build a T-Bucket for Under $3000” how to do that is covered in great detail and you can just adapt those techniques to have a nicely sturdy Bantam roadster body. To me, the Bantam roadster represents a unique variation on the T-Bucket theme. So, if you want to have something different, with a competition look and if you’re not looking for creature comfort and leg room then you’ll want to look into the Bantam build possibility. Hey, roominess isn’t everything. Especially if you’re going for a truly unique hot rod look. Case in point is the Austin Bantam roadster body above that has been narrowed 16 inches! Here’s hoping there are more Austin Bantam builds in the future based on the versatile T-Bucket chassis.

8 thoughts on “Austin Bantam Roadster as a T-Bucket Alternative?”