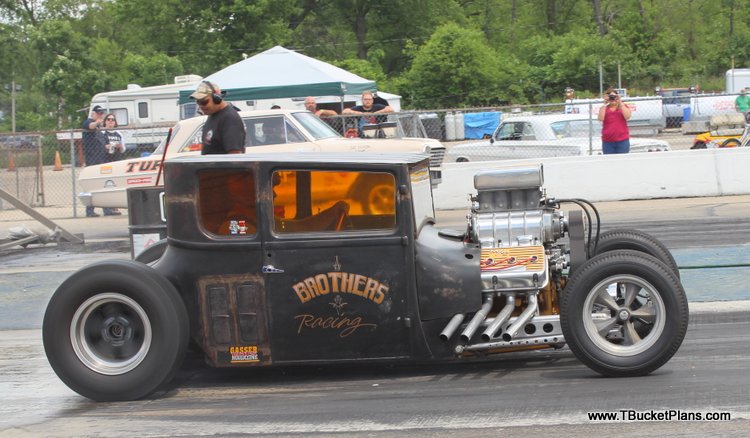 I’m an old guy whose hot rod influences are deeply seated in 1960s drag racing, so it’s only natural to be a big fan of nostalgia drag racing today. Sure, my first T-Bucket exposure was in 1957 seeing Norm Grabowski’s “Kookie” T in LIFE magazine but I was only eight years old and had to get my fix then by perusing the available hot rod focused magazines on the rack at the local drug store. As for seeing T-Bucket inspiration on the street, forget about it! I grew up in Kentucky and roadsters, especially of the T variety, were few and far between. The focus was on drag racing and the local 1/8th mile strip reinforced that.

While my dad was a circle track fan, he saw the drags as a silly, less-than-skillful automotive competition. By the time I was 12 I was able to finagle a ride to the strip with a family friend — and I was hooked. Throughout every Summer in my teens I spent as many Saturday nights as possible absorbing the mechanical creations and action at the local drag strip. Unlike today’s big bucks traveling professional teams and bracket racing’s electronically controlled bogging and braking boredom, drag racing in the 1960s was exciting!

It was also a showground of backyard ingenuity that inspired anyone lucky enough to attend and view the incredible variety of cars in competition in the large array of classes, most of which no longer exist: Gassers, Altereds, Modified Production, Street Roadsters, etc.

If you didn’t get thrilled seeing a tiny Nash Metropolitan body on a home-brew lightened frame hopping down the strip in reaction to a fuel injected Chevy small block you were probably already comatose. Personally, the Altered classes were my favorites and with their abbreviated bodies and exposed high horsepower engines they were first cousins to T-Bucket hot rods.

My absolute favorite back then was an Austin Bantam bodied Altered built by the late David Green. To give you an idea of the local racer roots, David’s three sons, David Jr., Jeff and Mark, grew up to be NASCAR drivers. I had the good fortune to be able to drop by David’s garage from time-to-time as he was building this awesome wheelstanding 301 Chevy-powered B/Altered that dominated the class and Middle Eliminator regionally. It was my first real look at the same simple underpinnings used on many a T-Bucket and that exposure really reinforced my lifetime love of T-Bucket hot rods. Of course, attending nostalgia drag racing events also keeps me in tune with people who race and plan to race Willys and Anglia gassers like we sell plans for at our sister site, GasserPlans.com. Just this past weekend, I attended the 7th Annual Hunnert Car Heads-Up Drags at Byron Dragway and it was a real day of fun, despite a very thin crowd due to early morning showers.

There was something for everyone. From nostalgic front engine dragsters. And, of course, the ever-popular tri-5 Chevy gassers. But my absolute favorite is the supercharged hemi T coupe Altered of Jeff Jacobson of Brothers Autobody and Repair in South Beloit, IL. To me, it epitomizes the the ingenuity and creativity that was evidenced in the Altereds of the 1960s. It’s this kind of creativity that still inspires me today. To give you some perspective on how radical this little Altered T coupe is, check out the pic below. While the photo above is of a relatively stock appearing T couple of the same age as the Brothers’ Altered, it’s even been lowered a bit so the height decrease in the Brother’s blown Altered is incredible.

And if you’re curious what it sounds like and whether or not it can turn a decent time then you’ll enjoy this nice little video captured by VictoryRedColorado at a prior year Hunnert Car Heads-Up.

Heck, I like this bad little T coupe so much I’ve included another video. Look closely at the beginning and you’ll see it’s nice interior.

If you happen to live in the Midwest and want to take in what I feel is the absolute best nostalgia drag racing event then you’ll want to make plans for the 7th Annual Meltdown Drags July 15-17, 2016 at the Byron Dragway in Byron, Illinois, where 600 amazing cars, trucks, dragsters and bikes have already preregistered to put on the best vintage drags meet in the world! There’ll be plenty of T-Bucket building inspiration on display and a number of very fast T-Bucket roadsters running as well.