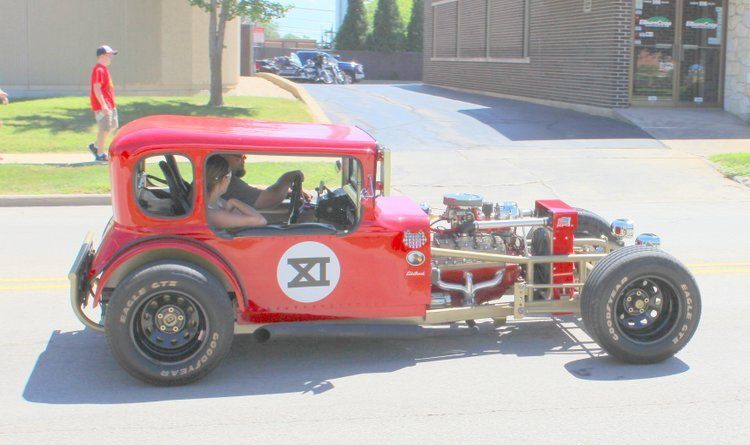 I was leaving a car show at the end of the day a few years ago, looked up and couldn’t believe my eyes. I snatched the lens cover off my camera, hit the power button and started snapping away at a car I’d only envisioned in my mind up until that moment: a Vicky modified body street rod. It looked like someone had driven it right off a dirt track. And it was a street rod based on an extremely abbreviated 1932 Ford Victoria body like I had started dreaming about years ago when first laying eyes on one in the Speedway Motors Open Wheel Catalog. But, in a matter of seconds it drove past me and was gone. It hadn’t been on display at the show and I wanted so badly to see this car up close and personal to answer some of the many questions I’d had in my mind about using a fiberglass Vicky modified body on a T-Bucket chassis for a unique street rod.

It was well over ten years ago that mud drag races were a semi-regular feature on cable television. About the same time, I noticed Speedway offering the Vicky modified body in their catalog.

That same body seemed to be in pretty wide use on mud drags cars.

And in the Speedway catalog they noted that the bodies were for “racing”.  Sure, when you saw them on TV they kind of shook a bit. But competition-weight fiberglass on a chassis that’s skipping over dirt with a high horsepower engine is bound to shimmy and shake. There was no denying, though, that body had a very cool 5-window profile. And it sold for less than $500! Compare that to a legitimate Deuce Vicky fiberglass street rod body for anywhere from $7-9,000. I can remember scratching my head and wondering if this might make the ultimate low-bucks hot rod with a roof. After much thought, I gave up on the idea for a number of reasons.

Still, if those things could be overcome, I thought it would make a killer little T-Bucket chassis based street rod. To put things in perspective, the Vicky modified body is 71 inches long, compared to 49 inches for the T-Bucket. The Vicky modified body is 40 inches high, which is a foot over the back of a T-Bucket. You’d have to sit low, but with the Vicky being over a foot and a half longer than the T you’d have some reclining room, even allowing space behind you for fuel tank and battery.

And if you don’t mind close contact with your passenger you could fit two people in the Vicky, although it’s only 34 inches wide compared to a “roomy” 46 inches for the T-Bucket. I think that’s the only time the word roomy has been used in describing a T-Bucket. 🙂

The bonus is that at the bottom of the Vicky body, it tapers to 31 inches, compared to a firewall width of only 28 inches for the T-Bucket. So it would definitely fit on a standard width T-Bucket chassis. Now, don’t get me wrong and think the Speedway Vicky modified bodies have only been used for mud drags. They have been used for nostalgia modified racing, as in the above example. And, by the way, these aren’t Legends cars bodies, which are 5/8-scale, full-fendered fiberglass replicas of the NASCAR Modifieds of years past. The Speedway body is actually a reproduction of the kind of cut down steel Deuce Vicky bodies that were popular for racing back in the day. Yeah, it brings tears to my eyes, too, thinking about all those  beautiful steel Vicky bodies that met their end on the dirt short tracks of America. But that was then and this is now and thanks to Twitter I recently had an opportunity to rediscover the Vicky modified coupe that briefly caught my gaze years ago. I saw a Tweet that linked to that same same Vicky modified now listed on eBay. Hey, speaking of Twitter, if you don’t already, follow us now because you’ll catch a lot of fun T-Bucket stuff you won’t find here or on our Facebook page. On closer inspection, I noticed that the builder had solved the “no doors” problem by making the side window opening larger by cutting it down further on the body. It was then padded, not only for an arm rest, but also to make stepping or crawling in a bit less painful. You’ll note the body is unchanneled for more head room and it looks like about 3-4 inches were added to the cowl for some more leg room. And this builder had gone all out for the genuine track car look by using a modified-type frame with full roll cage. But to build a low bucks hot rod you could just use a regular T-Bucket frame with a couple of slight additions. As you’ll see here, the front roll cage hoop serves to not only support the body and the roof in particular, but it also is the structure to support a fabricated windshield frame. By the way, the Speedway Vicky modified body is constructed of two sections, joined at the center such that there’s a splice seam down the middle from front to rear. Here, it’s been sanded off and some further roof support provided to make it more flat and smooth. Looking toward the windshield from inside, you’ll see that the roll cage structure also serves to support the roof. But, if you just wanted to go with the front hoop the center section of the roof could be reinforced with simple wood ribs like Chester shows how to do to a T-Bucket body in his “How to Build a T-Bucket for Under $3000”. In looking at the interior, you’ll see that you could actually gain some extra room using the T-Bucket wood stringer reinforcement of fiberglass technique rather than the full-on competition roll cage. As far as the narrowness of the Vicky modified body, you’ll see that there’s room to fit in two fiberglass racing bucket seats without a problem. In keeping with the nostalgia racing theme, the builder used a great looking flathead engine. If you were to use a T-Bucket chassis like in the California Custom Roadster T-Bucket chassis plans, the frame rails are 26 1/2 inches wide, which would align nicely with the 31 inch firewall width because you’d have a fiberglassed-in wood floor like on a T-Bucket that would be sitting on top of the frame rails. But, if you wanted to make your chassis wider and then taper in after the firewall you could do that following how Bob Hamilton shows in the StreetRod 101 Frame & Chassis Construction DVD. And if you use floor-mounted pedals like Chester shows how to make in the T-Bucket book you can avoid the master cylinder clutter on the firewall. This car is also running a Ford 9 inch rear and some pretty fat reat tires, so you’ll notice that some cycle type fenders have been added to the body. With a more narrow S-10 rear and not quite so wide tires they wouldn’t be needed. Up front, it looks cool from a track car perspective, but done street rod style with a T-Bucket chassis a suicide dropped axle/transverse spring combo would look great with appropriately narrow wheels and tires along with either a T or chopped Deuce grille shell. But, circle track or street rod, you gotta’ admit that the ’32 Vicky modified body looks pretty sharp in its reduced proportions. In the above shot, you can see the fuel tank and its filler in the rear window. So, hopefully we’ve provided a little inspiration to builders who’re looking for something a bit different from a T-Bucket body, but that may still be done using the same simple construction techniques and on a reasonable budget.