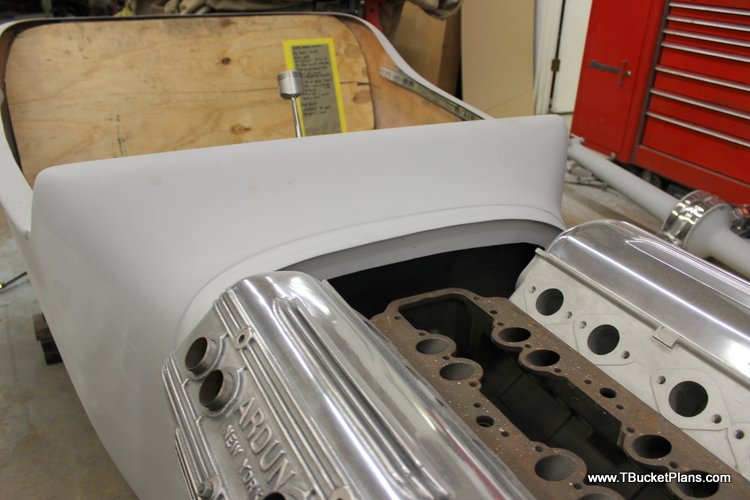 A lot has happened since we first introduced the Fox Valley Hot Rods low profile Ardun T Bucket project 90 days ago. However, the original plan to unveil it at the Detroit Autorama later this month has gone by the wayside in light of both customer project demands and typical staff turnover in a busy hot rod shop. So, a new target show for the T’s introduction has been established but for now we’ll keep that under wraps just in case the timeline encounters any unforeseen interruption. For example, in an earlier update you saw how the rear split wishbone radius rods mounted through the low-slung body. That’s cool, but kind of looks strange when you see it going through the door. And there’s a solution to that visible distraction. The solution is to just get rid of those faux door reveals. After all, Model T’s didn’t have opening driver side doors until 1926. As long at you’re at it, why not remove the body line reveals from the cowl also. Look closely above and you’ll see something different. Most fiberglass T-Bucket bodies don’t have a firewall lip. Rather, just a flush flat surface, which looks kind of awkward also. Matt fabricated a nice lip to make the body look more authentic and also allow for a bit of a recessed firewall. When you take a look inside the body, you can see where the door reveals were cut out and the door fitted smooth to the body with fiberglass bondo. The above photo is also a good example of how the rear split wishbone connected through the former door to the chassis. Now a nice transmission tunnel has been fabricated as well for the C-4 transmission. You’ll note that the tranny tunnel was fabricated to fit as closely as possible in order to not take up precious foot room. You’ll also observe that a shadow firewall has been fabricated to be able to conceal wires and other components from the interior view. There’s a new addition to the dual Jerrycan fuel tank in the form of bead-rolled Chinese letters. One of the most memorable and confusing elements on Matt’s dad’s Ardun T Bucket was the Chinese lettering on its fuel tank. While the letters spell out “Cotton” they were inadvertently applied in reverse by the striper. When finished, this will be a very nice tribute element to the Cotton Werksman T. In this view, you’ll note that the oil pan is now protected by the frame rails. Plus, you can also see how the rails have a subtle taper from the firewall and a just as subtle kickup at the front to keep the T’s profile low.

We know you’ll want to follow along with more build progress on this really innovative, yet traditional, Ardun T Bucket. Be sure you don’t miss the next installment by Subscribing to TBucketPlans.com RSS Feed