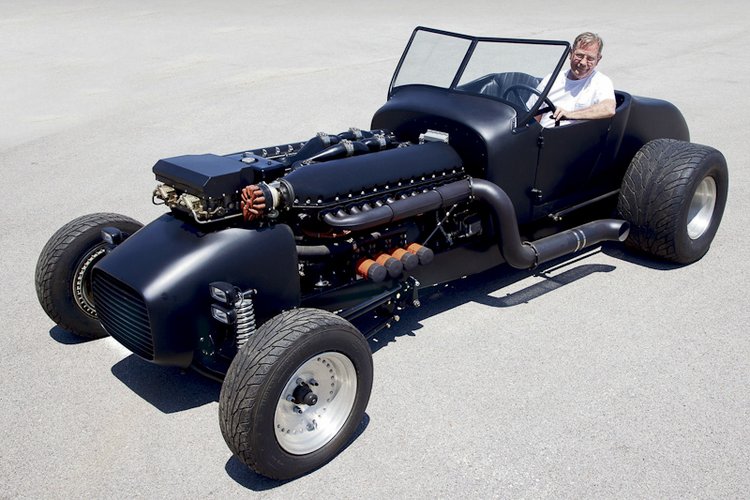 While flipping through a Street Rodder magazine from 32 years ago, I was struck by one of their “Garage Scene” features on an Allison V 12 T Bucket that was under construction back then.

It’s no secret I’m a big fan of unique T-Buckets. I also grew up in awe of the Allison-powered “Green Monster” dragsters built by the Akron-based Arfons brothers — but that was just through the magazine pages. More pertinent, though, is that I grew up in a town on the Ohio River that hosted Unlimited Hydroplane racing and when those Allison powered hydroplanes were on the river their 1,712 cubic inches of awesome low rpm power could be heard all over town.

Of course, you need to know that the Allison V-12 engine was developed and built by General Motors in the late 1930s as a 1,000 horsepower engine to power fighter aircraft like the famous P-40 Warhawks. Over 70,000 Allison V-12s were produced to support our military in World War II and thousands of them landed on the surplus market in the late 1940s. Thanks to the war surplus market, a precision built engine that the U.S. government paid $12,000 for could be purchased for a mere $200 — sometimes less!

These marvelous extreme horsepower engines are well described by Allison Unlimited Hydroplane guru, Ed Cooper, who said “These engines were assembled in Indianapolis by women workers. But the rods and crankshafts came from Cadillac, the ignitions from Ford and Bendix, the magnesium parts from Maytag – and everything fit as perfect as can be.”

I just had to know if that wild Allison V 12 T Bucket had ever gotten finished and on the road.

I did some research and was excited to find the answer in a really great automotive blog, Tom Strongman’s Auto Ink. Tom Strongman is a journalist and photographer who has covered the automotive industry for more than 25 years as the Contributing Editor for the Kansas City Star. His work also appears in the St. Louis Suburban Journals, the Columbus Dispatch, Universal UClick Syndicate and Home and Away Magazine.

After reading Tom’s story about how this awesome Allison V 12 T Bucket had evolved I realized that I didn’t need to do any further research. Tom has documented Cliff Hix’s incredible T-Bucket achievement and was kind enough to grant permission to reprint his story, which appeared in 2011, some 27 years after its construction appeared in Street Rodder. So, enjoy  Tom’s story and photographs which follow. And when you finish, be sure to check out Tom Strongman’s Auto Ink for more interesting special interest auto stories and a treasure trove of beautiful photographs. Way too much is just about right, or so the old hot rod adage goes. Cast your eyes on Cliff Hix’s scratch-built hot rod, with a V-12 Allison engine from a P-38 fighter plane, and you get a good idea of what way too much looks like.

“This is the most beautiful, perfectly proportioned thing I’ve ever seen.”

Hix, 76, owns First Edition Screenprinting and Cliff Hix Engineering, Inc., in this small Kansas college town, and I think he’s an engineering genius, although he certainly would never use words like that. He’s way too quiet. He has designed and manufactured several machines for his screen-printing business, and they are marvels of creative engineering.

Hix gets a mischievous twinkle in his eye as he describes his flat-black, airplane-powered roadster. Walking under the car as it sits on a lift is the perfect way to see Hix’s handiwork up close. He designed and built the four-bar, coil-over suspension, as well as most all of the ancillary pieces of the chassis. He constructed the massive frame, with a 123-inch wheelbase, from raw steel. When you build a car with an airplane engine, most everything has to be modified, or made from scratch. Hix replaced the original dual magnetos with twin distributors that he designed himself. There are two, 12-cylinder distributors because the engine has two spark plugs per cylinder. Each cylinder is 5.5 inches wide. Sending fighter-plane power to the rear wheels is a sketchy proposition at best. Hix adapted a Richmond Super Street five-speed overdrive transmission, and the rear axle is a Currie nine-inch Ford with a 2:47 ratio. Hix would like a higher ratio but none is available. The body started as a fiberglass, ’27 T bucket, but Hix and his younger brother, Dan, from Arkansas, stretched it to accommodate the rear-mounted radiator. Going fast is nothing new to these guys. They drag raced for years, and set an A Gas Supercharged speed record of 124 miles per hour in the quarter mile in 1958. The widened body has been reinforced with steel tubing. Hix made door latches that are simple, stout and clever.

Hix explained that when he first got his Allison V 12 T Bucket running, he took it out on the road near his shop alongside the Pittsburg airport. The engine was just idling, and when it seemed as if it might die, he dabbed the throttle. With a sudden roar, the engine spun the 14-inch wide Mickey Thompson tires so quickly that the car shot sideways in the road and nearly pitched Hix into the ditch.

“That’s when I discovered that way too much is, well, way too much,” he said with a mile-wide grin.