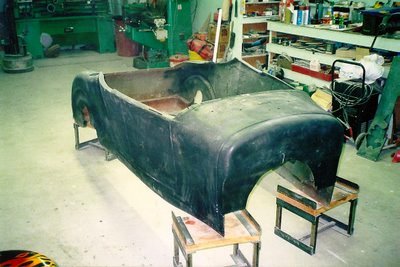 If you’ve read our story about Bob Hamilton’s Oakland Roadster Show winning Track T you’ve seen that Bob can build a great looking 1927 T Bucket roadster. This time, though, you can follow along as Bob uses the same skills on a relatively low budget 1927 T Bucket roadster for his own driving fun. But first, I just want to show you a few examples of Bob’s versatile hot rod building expertise. Recently, we featured Bob’s skills in a nice story about how to build a stretched T-Bucket body like the one above.

Bob Hamilton is an incredibly skilled hot rod builder and we help others learn from his many years of experience via Bob’s great StreetRod 101 DVD Library that we offer on our sister site, StreetRodPlans.com. The nifty red Model T coupe above is one more example of the kind of neat hot rods Bob turns out in his modest home shop. Of course, Bob practices what he preaches and this is his Model A daily driver. And if you like the more sinister look of a chopped Model T, Bob’s done that, too. To show what a truly great guy Bob is, here’s a pic of the awesome red coupe he built with his son-in-law. Another son-in-law build by Bob is this terrific looking Deuce highboy, but Bob modestly doesn’t claim too much credit, noting that it was pretty much a “bolt together” job.

With that as background, we’re happy to be able to present a fun series where we have the privilege of following along as Bob builds a 1927 T Bucket roadster for his personal knocking around pleasure. This is our first brief installment and we’ll try to regularly add new ones when they are available. So, check back often because this will be both fun and incredibly informative. “I traded for this 1927 T Bucket roadster body. It had been slated for a drag racing car, but never completed. The glass is in good shape and has a bottom roll pan that was installed at the factory. This is good because it gives about 4-6 inches more depth inside the car when built as a high boy.” “This is another shot showing the extent of material removed from the back and the type of channel that it was slated for. Notice the stands I built. I use these when I assemble and fabricate other cars. Easy to build and raise the vehicle – with tires and wheels – 12 inches off the ground. As you can see, they are also handy for other things.”

That’s all for today’s installment: just a quick introduction of Bob and what he has to start his 1927 T Bucket roadster project. Part 2 will come quickly.