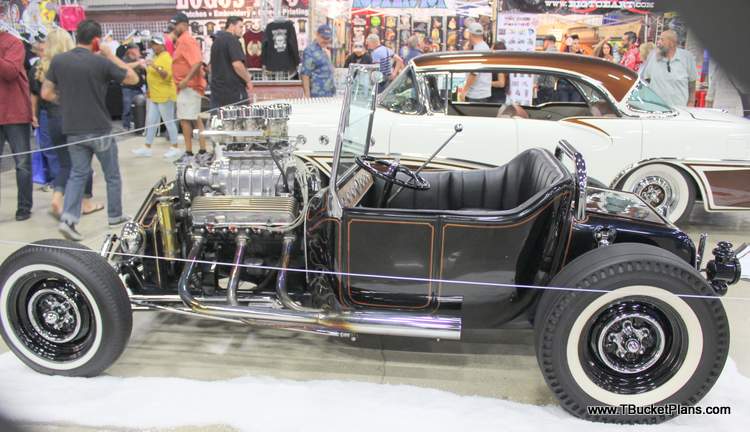 No, the photo below wasn’t taken in 1956, although with the Chevy Delray and the cool 1915 T roadster it sure looks like it could have been.

Actually, that 1915 T roadster didn’t get built until a couple years later in 1958 and it debuted at the local drag strip as a supercharged Modified Roadster. 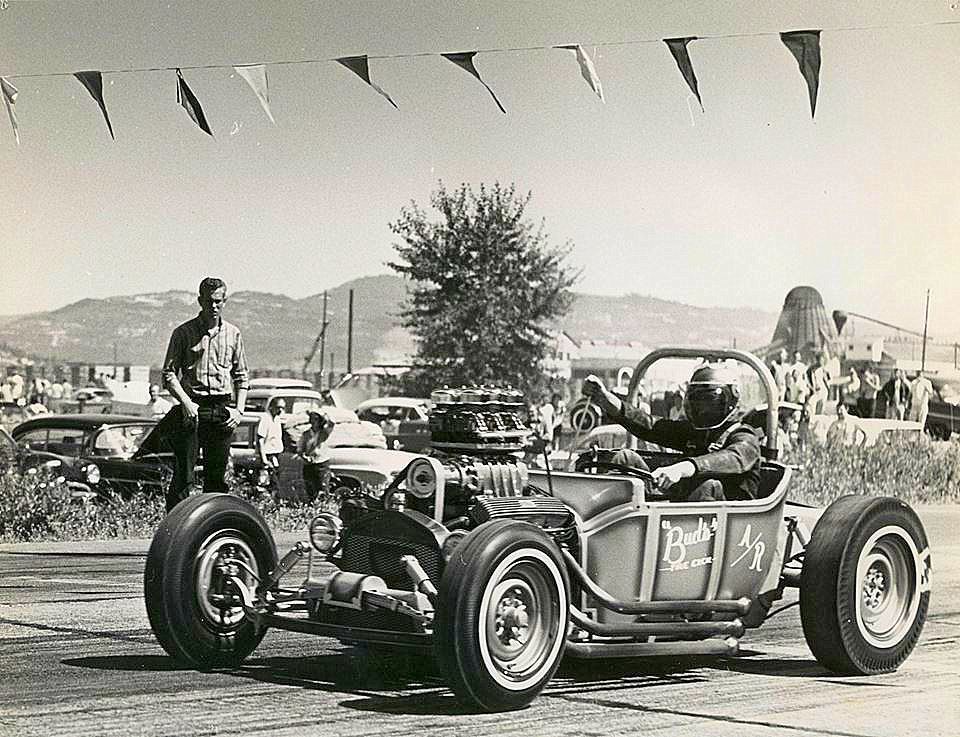 I had the opportunity to see the little T with the big engine 57 years later at the 2015 Grand National Roadster Show in Pomona. Vintage hot rod and custom car collector and preservationist, Marcus Edell, had it on display and there was always an admiring crowd around it. Who wouldn’t be fascinated by this low-slung hot rod with its diminutive T body overshadowed by a big vintage Cadillac V-8 topped off with a GMC supercharger fed by a sextet of carburetors?! The view from the front was even more staggering with an abbreviated T grille shell sunken down behind a unique front frame kickup with the big Caddy towering over it. The view was equally fascinating from the rear with a chrome roll bar just barely peeking over the back of the 1915 T roadster body and a turtle deck like none seen before with reliefs for the transverse rear spring and brackets for the chrome rear shocks seemingly attached to it. The front frame kickup is visible in the above photo and there’s a reason the chrome on the headers is discolored and it’s not purely age-related. This T gets driven, too. We have Northern California hot rodder, rockabilly drummer and Gas Monkey look-alike Marcus Edell  to thank for bringing this 57 year old survivor back onto the hot rodding stage. But first, here’s the story about how this unique 1915 T roadster was created.

John Gates of Grants Pass, Oregon built this roadster in 1958 while still in High School. His original intention was to build a roadster to compete at the local drag strip in Medford, Oregon. He chose a 1915 Model T Ford roadster body with its narrow cowl which also emphasized the massive appearance of the Cadillac OHV engine. John modified an early Ford frame by bobbing it for a shorter wheelbase and it was Z’d in the rear and kicked up in front to achieve its ground-hugging profile. The 1915 T roadster body was channeled over the frame and the passenger door welded shut. The turtle deck was shortened in keeping with the short wheelbase and thereby further enhanced the T’s unique profile. Originally the car had a stock early Ford I-beam dropped front axle with ’40 Ford front brakes. For motivation, John chose a 1955 Cadillac 331 that was bored .100″ over to achieve a nearly 350 cubic inch displacement. The engine was balanced, with stock ’55 heads, a cam and Isky adjustable rockers. That was topped off with Edelbrock valve covers with Moon breathers attached. Young John Gates biggest investment in the T was what was sitting on top of the Caddy. He bought and polished a GMC 4-71 supercharger along with a Cragar drive kit that included the intake manifold, pulleys, belts, etc. and which sold for about $300 in 1958, the equivalent of about $2,400 in today’s money. To that he added a 6 carb adapter top and 6 Holley 94’s .  The stock distributor had its vacuum advanced removed and curve reworked. John then made a real cool set of individual headers that were belled at the ends but, as you’ll note in the photo of the original car on the trailer above, hung real low. The Caddy mill was mated to a 1937 LaSalle transmission through a Cragar adapter and topped with a chromed tall shift handle. The wooden gauge panel with Stewart Warner gauges John installed in the late 50’s are still in the car today. A 1950 Oldsmobile rear axle with stock 4.10:1 gears was suspended with a Ford transverse spring with home made rear radius rods. Stock ’50 Olds drum brakes on the rear did the job. For the first three years the car was completed, it was strictly a drag car with a typical normal height roll bar of the time for adequate driver protection and chromed push bars in the rear. It was later replaced with the shorty roll bar now seen on the car. The roadster remained in primer most of its racing days and was a regular at the Medford strip and won its share of trophies in its class. Around 1960 John painted the roadster himself a crazy pearl white with candy green panels. The name painted on the back of the car read “Blitz” along with an air brushed trophy cup that appeared on the grille as well and there seemed to be something like a family crest painted on the driver’s door. The car was shown a few times at indoor Oregon shows in its wild paint scheme and is likely displayed above with some of its drag racing trophies. In 1961 John registered and titled the car in Oregon and around that time opened his own body shop in Grants Pass. John replaced the Ford I-beam axle with a tube axle in the 1960’s and went with what was then the latest in braking, ’64 Volvo disc brakes. The roadster now uses a Corvair reversed steering box like many T-Buckets, but it’s not known what the original box was that it replaced. The low-hanging individual belled headers were replaced with what you see today. John was a bit of a mechanical genius and ahead of his time. Something very rare on this 1915 T roadster is the use of a boat water pump which is still on the car. John made his own very interesting cooling system which is plumbed much like that of a boat, no doubt because conventional radiator technology of the day couldn’t keep the blown Caddy cool on the street with its chopped grille shell. There are two radiators; one in the stock location and one underneath the car horizontally with two squirrel cage heater blower motors for electric fans. This was done before the days of aftermarket electric fans of course. The oil pan also has a breather on each side for extra ventilating. John went to a “vanity” chromed roll bar later on when it became a street car.   Sometime between 1964-72 John repainted the car the black lacquer paint with flames striping that you see today. Since then, the only real changes that John made to the 1915 T roadster beyond the paint, front axle, brakes and headers was to add slot mags and wide tires along with a tan “boat interior” which is how it looked when Marcus purchased the roadster, which is a story itself.

Marcus had seen the 1915 T roadster in an Oregon Craigslist ad with a bad photo and tried contacting the seller a few times with no luck. Sometime later, Marcus learned that his brother was traveling to Grants Pass, Oregon to pick up a survivor 1915 T roadster he had just purchased. Marcus meanwhile had purchased the survivor Ron Kimball ’28 Model A roadster that was built in 1963 and which he was in love with. Long story, short: after a few sleepless nights, Marcus did a trade with his brother.

Marcus did some minor mechanical maintenance and had Tony Gomes of Tri Valley Glass and Upholstery do the interior in black vinyl, replaced the wheels and tires and started enjoying driving the car around town whenever he got the chance to get away from the house alone without the kids or the wife.

Now, here’s the cherry on top. When Marcus’ brother bought the car he got not only a treasure trove of original parts and the original trailer but also John Gates’ collection of 8mm movies from back in the day, some of which featured the little 1915 T roadster. So a “nice” little video was put together from those old movies and it’s below, but first you have to put it in the proper perspective.

If you’re not of the Baby Boomer generation you need to know about 8mm movie making of the day and why it can be so bad. To start, the cameras back then didn’t operate on battery power — you had to wind them up! Which wasn’t too big a deal because the “movies” were so short.  You’d buy a small canister of 8mm film at the local drug store — remember them? You had to carefully load the film into the camera, and then you could shoot a whole 2 minutes of action. Then you had to take the film out, flip it over and you could shoot another 2 minutes.  And 8mm film required a lot of light to expose the film properly, so shooting outdoors was hit or miss depending on clouds and you’d get dark, grainy film.  Done shooting, you had to mail the film cannister back to Kodak who would process it and return it on small 3 inch reels. This process alone could take the better part of a month. To make it worse, sometimes the undeveloped cannister would sit for months while you saved up to pay for the film processing and the film would degrade. And any of those little developed 3 inch reels you find today have been sitting around drying up for over 50 years.

With that explanation of the video quality, click below and enjoy. Marcus has owned a multitude of T roadsters and is always on the lookout for a survivor rod or custom that’s a new challenge. So, after the 2015 Grand National Roadster show, Marcus made a deal with Southern Californian, Greg Beck, to acquire the roadster. When I returned to the 2016 Grand National Roadster Show I found myself drooling over the most recent Marcus Edell survivor acquisition, the Joe Roth ’59 Impala Kustom. Purchased new in 1959, the Impala was quickly customized and became a Midwestern trophy-winning show car.  The $29.5K asking price for such a time machine is an absolute steal! For more info contact marcusedell@att.net or 510-648-9284. By the way, Marcus wasn’t without a T-Bucket for long because he recently reacquired another of his steel bodied 1915 T roadsters, this one with Buick nailhead power. But, that’s a story for another day. Remember, if you enjoy these kinds of T-Bucket stories please take a moment to share them using the Facebook and Twitter buttons and we’ll promise to keep ‘ coming! Thanks.