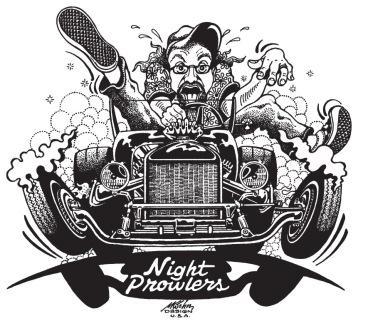 So I got an email the other day that said, “I think I already know the answer to this, but I thought before I gave up I would put it to the source … does anyone out there sell a steel T-Bucket body?” I responded that, to my knowledge, nobody sells a repop steel T-Bucket body because not many people would be interested in shelling out something like $5-10k+ for a new one when they can buy a fiberglass one for a few hundred bucks. It’s not like with Deuces where the gap is much smaller.

But then the guy responded that he’d be one of those people interested in a steel T-bucket body, either new or used, and would even be interested in a used steel touring body he could cut down for some more room. About that time, I put two and two together with his name and email address and realized this was the new owner of The Night Prowlers, who’s also been writing a column in Car Kulture Deluxe featuring a cool author-in-a-T-Bucket logo. I’d noticed the logo because in my mind The Night Prowlers was all about custom stuff — Merc’s, not T’s. So it was quite a pleasant surprise when Ron Springer sent me a few pics of his T-Bucket, upon which the CKD logo is based. Ron’s bobtail T-Bucket looks great and after spending some time looking at the pics I realized this was a T that I had seen and admired in the past, although with different headers and just a single quad carb. According to Ron, “Three years and some months ago, Jill and I married and bought a beautiful place in the country. After we got the house situated, I built a modest shop building and set about the task of putting together a small Hot Rod and Kustom Shop. The idea was to buy good solid original condition cars and trucks to rebuild, customize and sell. But we also wanted to have some cars to use as “seed material” that were already built.”

“We saw ‘Maggie’ on Ebay and she was much different than the other T’s we had looked at. She had wide whitewall tires, painted spoke wheels, and looked pretty sedate as T-Buckets go so we did some bidding and ended up with the car. When we took delivery it turned out that the seller was actually a broker who knew very little about the car. He handed us a small file and said he had never even looked inside.”

“That is how we came to own “Maggie”, a more or less traditional ‘glass-bodied T-Bucket. When we got home, I found the name of the previous owner, Vince Nowack, in the paperwork and tracked him down. Vince is an old Hot Rodder who has been building Rods most of his life. Vince Nowack is also the owner of the Nowack Company. They make industrial hydraulics, and they also make the Rear-Steering set-ups for Bigfoot and just about every other monster truck on the circuit. Maggie was painted in the Bigfoot shop.”

“Over the last couple of years, Vince has sent us literally hundreds of pages of info and pictures about Maggie. Turns out that Vince built Maggie as a driver back in 1998. He actually started the build with a 1923 Model T chassis, but before long all that was left was the I.D. plate and his creation had gone all custom. Vince hand built the frame out of 2″X4″ tubing and smoothed all the welds before applying innumerable coats of paint.” The photo above shows Maggie as she was when Ron and Jill got her with the hood. According to Ron, “When we got the car, it had a full hood on it and a single four barrel so we installed the Three Deuce setup from Vintage Speed and tossed the hood…wouldn’t fit anyway.”

“Vince drove Maggie for several years before he was invited to the St. Louis World of Wheels in 2006. At that show, Maggie won ‘Best Engineered’. When the show was over, it was snowing outside and it had begun to stick. While everyone else was backing their trailers to the door to avoid getting their cars messed up, Vince donned his leather Driving Cap, Goggles and Gloves and drove Maggie out the door to a standing ovation from the rest of the exhibitors.” For power, Vince robbed the entire drive train out of a basket case 1957 Corvette, so Maggie has a 1957 vintage 283 with late model heads. “The Vette engine is mated to a Powerglide which turns the gears in a genuine Hotchkiss rear end. The brakes are Disk over Drum with a 69 Cadillac donating the calipers in the front…no power either,” said Ron. “He even built a ‘hidden hitch’ into the chassis in the back so a trailer could be pulled…but you won’t find it unless someone points it out.” “He used a Corvair steering box to guide her straight mated to a hand-built column with a removable steering wheel with safety wires for show.” “I can’t remember who made the fiberglass bucket, but its a really heavy one.” “Vince even hand built the radiator shroud himself and worked out the unusual front suspension in his head. She rides on BFG Silvertones in front and Firestone Pie Crust slicks in back, and we drive her everywhere that way.”

“When I first spoke to Vince about the car he made me promise not to make her a trailer queen, and we haven’t. Last year, we were on our way home from a local Cruise-in and it was hotter than the hinges of…well you know…like riding inside a convection oven. It was right at Sundown and the bugs were as thick as rain. We hunkered down behind the tiny windshield and pulled our shirts up over our noses for cover. But the bugs had gotten so thick on the glass that I kept having to raise my head up to see where I was going. As we rounded a corner, unknown to me, a snake had slithered out onto the road and I ran over it. All at once Jill let out a scream. I had caught him with the right front tire and now Jill was covered with not only bugs, but Snake Juice as well. Sooooooooo, we are keeping up tradition.”

“And the name? Well Vince gave her the name. He said that where ever they went in the car it was like a ‘Magnet’ for onlookers and they would end up with crowds standing around her…’Maggie‘.” While The Night Prowlers has been around for a long time, Ron and Jill have been running Night Prowlers since January of 2011. According to Ron, “The previous owners retired and we took over, and what a ride it has been. I had a background in the hobby, but Jill was your typical Lady whose idea of a cool car was her Toyota Pickup with dozens of American Flag Decals all over it. The first time she saw ‘Maggie’ she was shocked to discover that a vehicle registered as a 1923 didn’t have any 1923 parts on it. She has come a long way however, and today she routinely answers just about any product related question our customers may ask. Occasionally she will turn a technical question over to me, but for the most part, she has become a ‘Car Gal’.”

Ron relates that, “We have worked hard to make Night Prowlers Kustom Car Parts into the company we know it can be, and that effort continues daily as we try the best we can to serve the Kustom Car and Traditional Hot Rod community. We are getting ready to launch our new Website, www.KustomCarParts.com at the end of January and what a difference it will be. We hope our customers agree. The old site at thenightprowlers.com is no longer, having fallen victim to the not too unusual situation of the past of a webmaster/service company owning the URL (web domain) rather than the business owning it. But the new site will be much better with lots of cool features like all of our products available for instant purchase, a Home Page designed after a ’59 Impala Dashboard, a free classified page for Cars and Parts for sale for use by our customers, a Kustom Car Blog, a Customer Car Picture Page, and a links page with literally thousands of links to all kinds of resources on the web for Kustom Cars and Traditional Hot Rods.”

“You know, your site (TBucketPlans.com) is the Go-To for T-Buckets!”, Ron said. “So please put the word out that I am still looking for a good steel bucket, or touring car body I can cut down to fit on her. Trends being what they are, steel seems to be the way to go these days. Besides, with my 6′ frame, she’s just a little small for me so I want to extend the frame a few inches as well. May also update a few other things, but nothing major. We like Maggie pretty much as she is.”