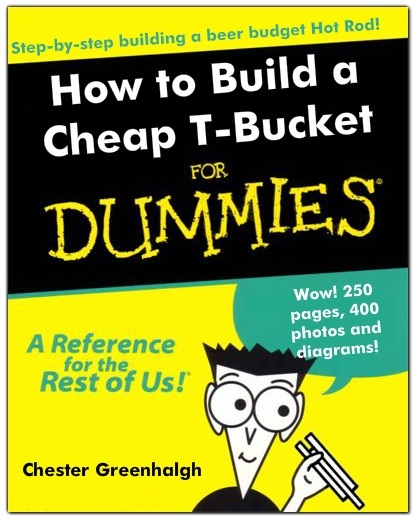 No. Such a book doesn’t exist, but I love the popular “for Dummies” series of “how to” books for the same reasons that tens of millions of other people do: everybody wants easy to read information that clearly explains how to do the things they want to do and presents it in an innovative, entertaining fashion. So, when the opportunity presented itself to create this book cover I couldn’t resist.

But, come to think of it, Chester Greenhalgh was really a man ahead of his time when he decided 25 years ago to meticulously detail every element of building a T-Bucket roadster so that “How to Build a T-Bucket Roadster for Under $3000” demystified the process and presented it so clearly that thousands of hot rodders were able to say, “Hey, I can do that — and on a budget, too!”

At the time, there were no established book publishers catering to the hot rod field with such specific information. Most of the books on hot rod construction up until that time were filled with generalities, broad suggestions and lots of filler material. While Ray Sisemore’s pioneering “How to Build a Hot Rod” series that began in Car Craft magazine in 1964 was incredibly detailed for its time, it depended on a lot of components that were much more readily available and inexpensive back then (i.e., $75 Larry Watson paint job) than they were 20 years later, to say nothing of today. And one can’t forget that Ray had the huge advantage at the time of being in beautiful Southern California, where virtually all of those parts could be picked up across a counter at the scores of shops in the Los Angeles area catering to the hot rod market.

Enduring family apprehension and scorn that “nobody in their right mind would ever buy such a book”, Chester Greenhalgh persevered and when his manuscript was finished he used more of the same stubborn initiative that had taken him to that point and he set out to self-publish the now legendary “How to Build a T-Bucket Roadster for Under $3000“. This was in the 1980s before the term “word processing” was even used. Chester had to use such “old school” tools as a Smith-Corona typewriter, “white out” and the editing miracle of the day — correction tape. This was also two decades before anything like Kinko’s had even been conceived.

To say nothing of his personal investment of time and sweat, Chester had to make what was a significant capital investment for an everyday working man to get those first copies printed, bound and ready to take to the local post office to ship to somebody. Oops, we almost forgot. How does a one-man-band hot rod fabricator/painter/author/publisher go about selling his first and only book? Once again, Chester showed his chops as a marketer as well. He designed, orchestrated and photographed an eye-catching cover photo. Then, he designed a print ad that in the only small space available with his tight budget, told a complete, compelling story with a necessary economy of words that motivated prospective T-Bucket builders around the country to write out a letter to Chester saying they wanted to buy his book and including their name, address and payment, then putting it in an envelope with a stamp and putting it in the mailbox. (Man, how things have become so much easier with computers and the Internet).

Fortunately for Chester (and all of us reading this), his intuition was flawless. There really were lots of guys out there who had always thought about having a hot rod, didn’t have the money to buy one somebody else had built, so were left to build something on their own, with limited dollars, limited tools, and limited access to scarce early Ford parts which had made things so much easier in the 50s and 60s. The most objective evidence of the value of Chester’s pioneering work is that two decades after he published and sold his first book for $19.95, people around the world were ready, willing, able, and happy to pay more than $200 for a copy, knowing it was still a bargain in terms of how much time, frustration and money Chester’s innovative and offbeat techniques would save them.

If you already own a copy of Chester’s original book or our new eBook version, you know what I mean. If you don’t already own a copy, as others have said “it’s the biggest no brainer in the history of mankind”.
Get Yours Today By Clicking Here>