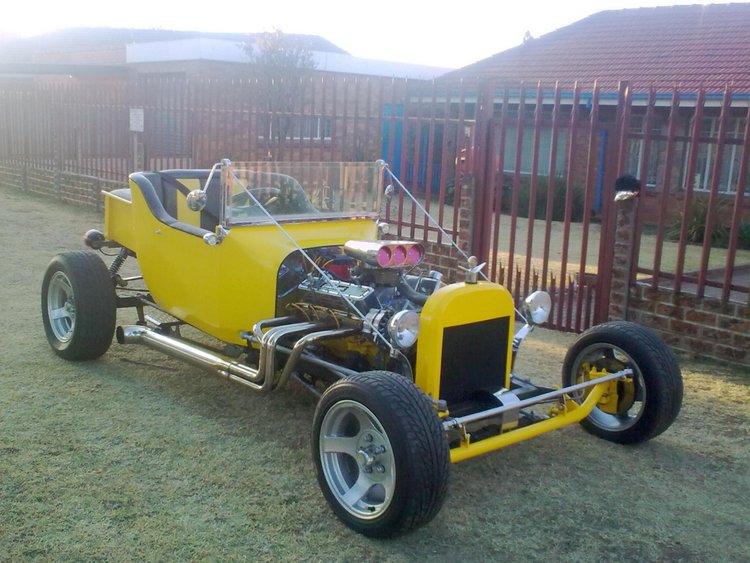 Marius Mouton is the skilled craftsman from South Africa who decided to build a T-Bucket truly from scratch. How in the world would he every do that so far removed from the epicenter of T-Bucket hot rod building? Take a look at the photo below of Marius’ carport and his under construction T-Bucket. Yep, that’s a copy of the old paperback version of Chester Greenhalgh‘s “How to Build a T-Bucket on a Budget” sitting on the cable reel under Marius’ smokes.

I was delighted one day to receive the following beautiful photo and email: I’m looking for Chester as I want to thank him for his book. I completed my T-Bucket from his book, ‘How to Build a T-Bucket on a Budget’. As you can see, I had some creative ideas of my own but kept it true to its roots. Not being able to find all the parts I needed in South Africa, most of the parts on my T-Bucket are handmade. That includes making my own T-Bucket steel body.
Kind regards,
Marius Mouton
Springs, South Africa But Marius is a very motivated guy. According to him, “The first time I saw a “T” flying down a quarter mile was when I was 4. I simply kept that picture in my mind. I knew that it didn’t matter what happened that I would someday have one.” Marius said, “Well, to start I bought Chester’s paperback book about building a T-Bucket from Motorbooks in Johannesburg around 1990. It is the one with that wild white T-bucket on the front cover (long ago out of print). If you look closely, you will see it in some of my building photo’s. It worked with me, and I still keep it close to my heart.”

How Marius Built His Own T-Bucket Steel Body Hot Rod To start, Marius built his T-Bucket frame from rectangular steel tubing as covered in Chester’s newly revised eBook version of How to Build a T-Bucket. In the photo above you’ll note Chester’s distinctive square front crossmember and the studs for mounting front friction shocks. But then Marius’ creativity comes into play when you see the 25mm (1 in.) square tubing he fashioned as the support structure upon which to form his own steel sheet body. Here you can see not only more detail of how Marius formed the 1 inch tubing for his T-Bucket steel body structure as well as the Chester designed front four-bar suspension and rear radius rods. In Chester’s plans he covers in detail how to make your own steel pickup bed using a square tubing construction as shown in the photo above. What’s really cool is that Marius took that concept and just extended it to be the basis for his T-Bucket steel body fabrication. But, the critical success factor here is that Marius included curves in his body framework and hammered the sheet metal to the curve shape. (Tip: If you build a body without curves and just flat sides it will not look right and you will be disappointed. Just take the time to plan for it and do it. It will be more than worth the extra effort!) This is a nice view of how the 2mm sheet steel (about 14 gauge mild steel) is formed and welded over the T-Bucket steel body framework. Plus, you get a real nice view of the pickup bed frame Marius constructed using Chester’s plans. According to Marius, the dropped front axle you see is 1 ¼” boiler tube bent in a 150 ton press. The front disc brake calipers and rotors came off a Chevy Commodore, a mid size rear wheel drive offering in South Africa in the late 70s. The front spindles are from a Ford transit van, as Chester suggests re an American Econoline. As noted in Chester’s plans a transverse leaf spring and friction shocks work here. In his book, Chester suggests a Model A grille shell, but since those are not easily found in South Africa Marius fabricated his own which is a nice hybrid of the Model A and Model T designs. It houses a radiator which is a custom build 4 core brass unit running a 16” electric fan. The headlights came off a forklift. Not having cast headlight stanchions available, Marius fabricated his own from 4″ x 1/4″ flat bar that was bent and welded up and ground down until he was happy and then it was all chromed. The final product looks great! Interior construction is pretty much as Chester outlines in his book, but in this case with right hand steering. Chester’s book outlines how to make your own T-Bucket windshield frame and Marius took it even further by fabricating his own frame brackets and having it all chromed when finished and again it looks terrific. To make it even nicer, Marius made his windshield frame hinged so that it will flip down like an original Model T version. Keeping true to his original T-Bucket inspiration as a four year old at the drag strip, Marius didn’t skimp on performance. The engine is a 350 Chevy with some go fast parts like Edelbrock Performer cam and manifold, 600 Holley, MSD hi performance
electronic distributor and knife edge crank. This combination is calculated to produce 400 HP. And that’s mated to a 400 Turbo with overdrive transmission. And it goes. According to Marius, it’s taken on some 1100 super bikes and earned nasty looks from them. If that doesn’t inspire you, nothing will. For a guy 10,000 miles away with virtually no access to T-Bucket and hot rod performance parts, and sky high prices for those that are available, to be able to build his own T-Bucket steel body hot rod that looks this great is a whale of an accomplishment to be proud of. What are you waiting for? We’d love to hear your story, too.