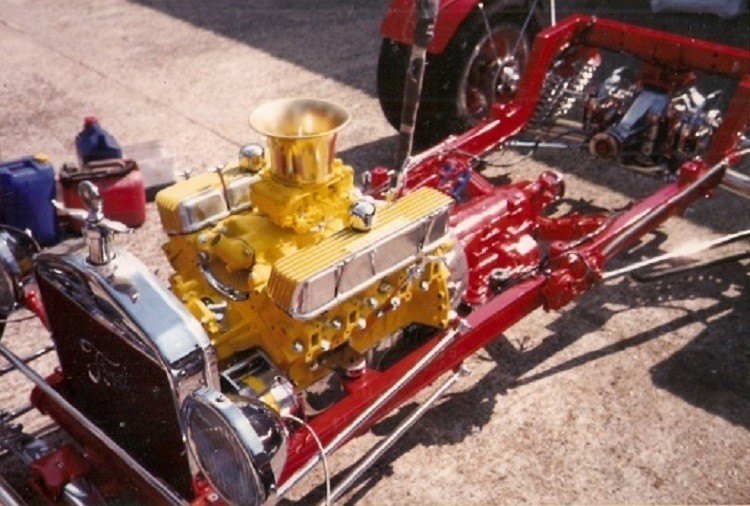 It’s finally time to get down to Dave Melling‘s T-Bucket engine transmission installation phase of the project. This is a very significant step in building a T-Bucket. Other big accomplishments along the way include completing the roller chassis and the first drive. But having everything open to view and bright and shiny make the completed T-Bucket engine transmission installation especially significant. This photo shows the engine hanging from a crane prior to being installed in between the chassis rails. The flywheel has not yet been fitted, not has the inlet manifold, carburetor, and oil filter. This photo shows the aluminum flexi-fan fitted to the Buick water pump, also the new location of the alternator underneath the engine on the nearside. The above photo clearly shows all the chrome plated bolts, oil sump and dipstick handle, also the completed, assembled rockers with the double valve springs. I wish it would stay this clean forever! The photo of the gearbox on its own was taken after it had been checked over, had the kickdown linkage removed, and been painted. The sump has been chromed, along with the mounting flange and propshaft flange. This photo shows the T-Bucket engine transmission installation when it was originally fitted into place to enable me to hook up all the wiring and linkages. This photo shows the layout of the engine and gearbox in the chassis, also the gearbox oil cooler and fuel pump. The chassis has integral fitting lugs for the oil cooler, although the rubber send and return hoses are too long and therefore run diagonally to take up some of their length. Here we see the final T-Bucket engine transmission installation in the chassis. The inlet manifold, rocker covers and carburetor have been fitted, along with the starter motor. Yet to be fitted are the exhausts, radiator hoses, fan-belt and fuel line — also the wiring cannot be completed until the body has been fitted. Although it was intended to complete the engine rebuild in the space of a week this was not possible. It eventually took the following two weekends, too! The engine fired up without too much trouble once a problem with the earth lead to the chassis had been sorted out.

Coming up next is the icing on the cake: custom T-Bucket exhausts.