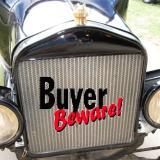 Thanks to the Internet, if you’re looking for a T-Bucket for sale, it couldn’t be easier. Depending on how far you’re willing to go for your dream bucket, the choices are almost limitless. But with so many T-Buckets for sale today, you still have to be very careful. Along with all the wondrous choices the Internet can present us in our T-Bucket shopping, we also get lots of information. No longer are ads limited by the old newspaper gauge of cost per word. In fact, at most places on the web where hot rods are for sale the words available to describe them are virtually limitless — and that’s where big problems can occur for you, the prospective T-Bucket buyer. Coincidentally, just as the collector car auction world has some controversy boiling up around the “JFK Ambulance“, the T-Bucket and hot rod world has its own little controversy centered around what, in my opinion, is one of the cooler looking, better constructed T-Buckets of the past ten years. It all started with your typical hot rod auction listing that was worded as follows: “California Built one of a kind 1915 T bucket , old school style build with 350 4bolt duel 2bl carbs no expense spared in this unique car , runs incredible and gets looks everywhere it goes , We are selling it ($19,995) for half of what it cost to build , completely finished , professional built hot rod.” (It’s important to note that the original builder of this bucket sold it months ago and has had nothing to do with this resale offering).

Where to start? Here goes: 1. California Built: it was built in Florida — at least another warm state. 3. no expense spared … We are selling it for half what it cost to build: It’s quite ironic that this particular T-Bucket at one time was the subject of a highly popular thread that chronicled the builder’s goal to build a $3000 hot rod. Sure he went over budget, but nowhere near the $39,990 cost indicated by the seller’s claim and asking price. 5. high end build … professional built: neither are the case, but the builder is flattered. Of course, just as in the aforementioned JFK ambulance controversy it’s not easy to know just who is the source for the misinformation because it could be a consignment sale and the dealer who initiated the auction listing might have been operating on whatever information was given to him by the consignor. Who knows? But, what’s important here is that you simply have to be skeptical about any claims you can’t readily verify when you see that T-Bucket of your dreams. From my perspective, I’m happy to have an opportunity to post some pics of a T-Bucket I’ve thought of as one of the sharpest looking around for many years. The original builder, although not a Boyd, Chip or Roy, is a real craftsman with an excellent eye for style. And, the “puffed up” auction listing ended with no bidders. It could be because the car was well-known and potential buyers were turned off by the many discrepancies in the listing. From my perspective, they would have a much better chance getting the asking price with a better informed description. So, the next time you see that “professionally built”, “show winning”, “never driven hard” T-Bucket on CraigsList or whatever, just remember: T-Bucket Buyer Beware. P.S. The original builder, who sold the T-Bucket 3 months ago and has nothing to do with the current ad, noted that if they had the above bathing beauty beach picture of the car that they might have claimed it was once owned by Paris Hilton.