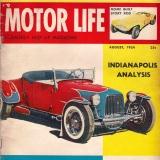 We’ve previously chronicled the history of the first fiberglass T-Bucket body, which was introduced over a half century ago. Three years prior to that event, the car-loving world was all excited about the possibilities of fiberglass bodies, no doubt fueled by the 1953 introduction of the monumental Corvette.

So, it was interesting to be reading the letters to the editor in the August, 1954 edition of Motor Life magazine and see the following exchange:

Plastic Buckets?
… since T and A roadster bodies in good shape are becoming extinct, why not copy them in fiberglass?
Jack Buck St. Louis, Mo.

(Editor’s Reply) This has occurred to us, too, so we’re planning an article on the subject for a future issue.

Since my Motor Life “collection” is just a handful of copies, I don’t know when or if that story on building a fiberglass hot rod body ever appeared. However, as you’ll note from the cover, the same issue had a story on “Customizing with Fiberglass” and the below ad also appeared ready to meet the needs of backyard body builders. By the way, I picked up the magazine hoping to learn more about the hot looking red, white and blue ’27 T-Bucket roadster featured on the cover. Alas, the following was the only information on that T:

Our cover this month features the “Bay Area Bomb”, a beautiful red and blue Ford T owned by Frank Rose, Oakland. Hop Up (July, 1953) featured this car under the title “Black Beauty” prior, obviously, to a more recent, striking paint job.

I’m gonna’ have to find that issue of Hop Up — or if anybody out there knows more about this T, let us know.

In any event, kudos to Jack Buck of St. Louis for being the first person to put out the challenge to the world to build a T body using the then new “plastic” material.