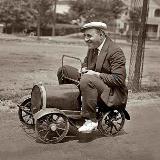 Tomorrow, we’ll be heading down to Dayton, Ohio for the 2011 T-Bucket Nationals presented by the National T-Bucket Alliance.

We’ll be there to take some photos and videos of interesting T-Buckets to feature here at TBucketPlans.com. We’ll also be talking to some of the many who have purchased Chester Greenhalgh’s timeless treasure, “How to Build a T-Bucket Roadster for Under $3000” (and/or the new, revised version). If you’re a fan of Chester’s plans, let us know because we’d be very interested in getting your comments on video for posting here as well. Just look for the guy in a gray TBucketPlans.com t-shirt toting the “Genius at Work” bag and say hello.

I look forward to meeting lots of you on Saturday. Thanks for all your support.