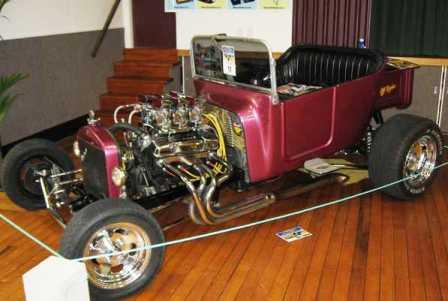 This New Zealand T-Bucket story isn’t mine. It’s Steve Roy’s. Recently, Steve emailed me to say that the T-Bucket he built in the 1980s and sold before moving to Canada and marrying was coming back into the family.

Well, that’s a cool story in itself but the kicker is that I wrote a post about Crazy Kiwi T-Buckets 12 years ago and Steve’s was the first one I featured.

So if you’ve got a story about your T-Bucket and it’s build let me know and we may publish it. After all, I don’t have time to do all of this myself. But remember, the more photos the better; especially build shots.

In my late teens I built a T-Bucket in my parents’ Auckland, New Zealand garage.  I started with a $600 un-finished project.

It had a 272 Y-Block, F100 3 speed (short tail shaft meant a longer driveshaft), early Ford I beam front suspension with split wishbones and 8” ford diff with coil-over and panhard bar.

The fiberglass body was one of the “bigger” NZ bodies which is still available today.

According to Hot Rod Todd: In NZ, we have “big” bodied buckets (the Koop de Glass one) and “small” bodied ones (the former Glass Repro ones). The bigger ones have the unusual cowl and are 52 inches long and the smaller ones are 44 inches long.

Not long after my New Zealand T-Bucket was finished, I tore it down and rebuilt it with the help of my brother.  I wanted something with a better ride, more show quality potential, but not a trailer queen, they need to be driven.

It changed to a 283 Chev small block with 4 barrel carb, powerglide, tube front axle with 4-bar and a fully chromed Jaguar independent rear.

It was painted metallic blue, although the photo below has a greenish tint due to age.

It drove so much better than the original build.

The picture of me cruising with Sam the dog was taken late 80’s by my sister who was in a car in front of me. It’s the only picture of me driving it when I owned it.

I owned it through my 20’s but sold it around 1989 after I met a Canadian girl and decided to move over there.

The guy I sold it to changed it a little, he chopped the windshield down, repainted it from the metallic blue it was and found a 6-pack manifold/carb setup.

He did may rod runs and shows over the years.

It was pictured in your blog “Those Crazy Kiwi T-Bucket Bodies”.

I was visiting family in 2014 and since my brothers still have hot rods, we went to a Rod Run called the “Beach Hop” on the East Coast of the North Island in New Zealand. The brother of the guy who bought it from me had the T-Bucket at the event and I got to have a drive of it – 25 years after I had sold it.

Fast forward to mid December of 2021 and I am looking at a Facebook group “T Bucket Enthusiasts NZ” one evening when I see a For Sale ad for my old T-Bucket come up.

I commented that “I’d love to own that bucket again…”  My wife said that I should buy it, but we live in Canada and the right hand drive T-Bucket is in New Zealand.  I still love the look of it and felt the nostalgia of having built and owned it.

The next day my brother who had helped me build it phones me to ask if I know my old New Zealand T-Bucket is up for sale.  We chat about it and all the old cars we owned way back.

The day after that, my youngest brother phones me to tell me that my old New Zealand T-Bucket is up for sale and that he always wanted to buy it if it ever came up for sale.  He is 10 years younger than me so I don’t remember if he ever got to drive it when I owned it. So, I said that we should all go thirds in it and bring it back into the family.  He said his son who is a teenager wants in on the deal too.  He reached out to the owners and after a bit of back and forth they struck a deal.  The current owners had to get it registered again as this had lapsed, and also get a WOF (Warrant of Fitness – a safety check.)  It took the owners a bit of time to get it back to WOF standard as it hadn’t be driven for a couple of years.  Some brake work and a bearing in the diff.

My brothers did a road trip to pick it up and it’s now back in the family 33 years after I had sold it.  I’m sure my youngest brother got the first drive of it.

After my brothers got it back to Auckland one of the first questions they asked my was “should we paint it blue again?”

When direct flights return between Vancouver (Canada) and Auckland and travel restrictions are eased up, my wife and I will be heading down to New Zealand to visit my family and my old New Zealand T-Bucket – still not sure whether I’ll stop by and see the T-Bucket or my family first.

Steve’s story points out two things worth noting in the T-Bucket world.

First is that more and more T-Buckets today are coming out from under wraps in garages where they’ve been hidden for decades. They’re everywhere and the prospect of getting them back on the street is exciting. What I’m seeing more and more is that the new caretakers know very little about T-Buckets, but more of that could be overcome if they’d do some research with material like our plans, which will help them understand what they have. (Shameless plug!)

Second point worth noting is that many of the surviving T-Buckets from the 60s, 70s and 80s have been redone to suit the tastes of subsequent owners, as in our recent stories about Eric Geisert’s 1926 T Modified Roadster and Clayton’s Hot Rods Tipsy-T. And that’s just fine. Remember, that it’s the exception rather than the rule to find a 50-year-old T like Tom Booth’s Torsion T that hasn’t been changed much.

I had a friend with a vintage Corvette who was afraid to take it out of the garage for fear it would somehow lessen its value. T-Buckets, however, aren’t meant to be an investment — they’re for enjoyment!

And if you’ve got a good story about your T-Bucket and its build remember to send us some details and photos and we’ll see if we can work it into a future post here. Thank you, Steve Roy, for sharing your cool story.