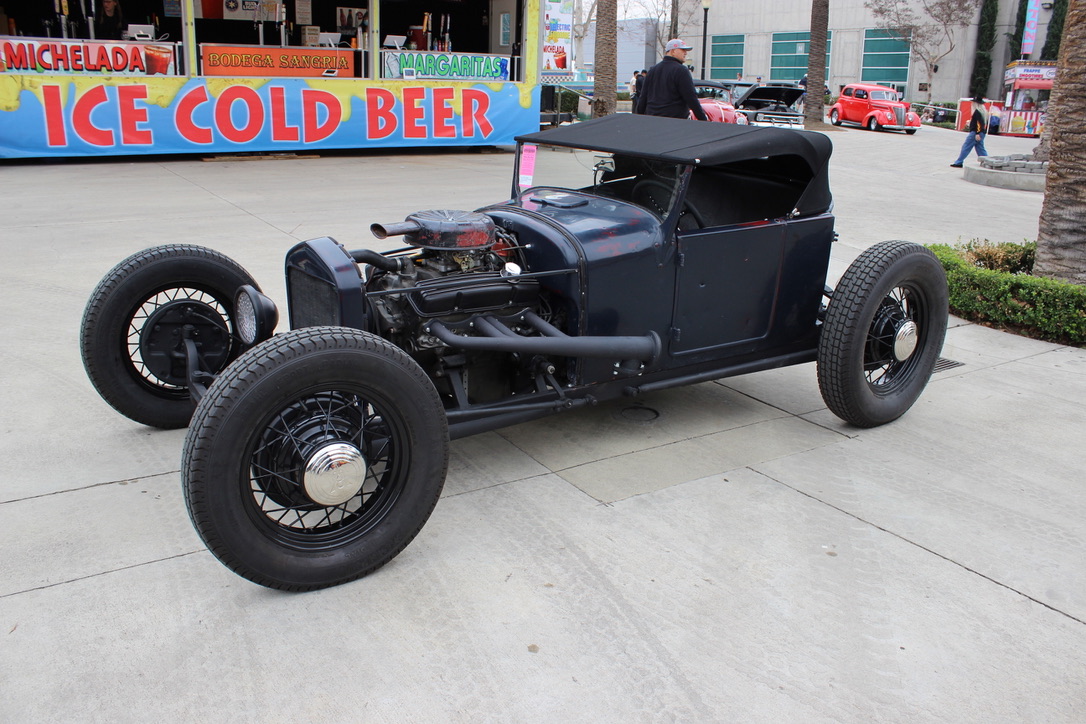 This post is not only about the Eric Geisert 1926 T modified roadster but also the fact that a T-Bucket is the perfect canvas upon which to paint your own hot rod vision. When it comes to T-Buckets and the world of T roadsters, there’s no more true saying than, “change is inevitable.” So, when surveying the Saturday outdoor car show at the 2022 Grand National Roadster Show I probably shouldn’t have given it much thought when one of the T’s I was looking at seemed vaguely familiar.

This 1926 T modified roadster looked like a true dry lakes survivor from the 1940s; that is, if you ignored the almost camouflaged small block Chevy engine. When I moved in closer to soak in more of the cool details I was pleasantly surprised to see the owner’s name on the entry card: Eric Geisert.

If the name Eric Geisert sounds familiar, it should. Eric was a Senior Editor at the now defunct Street Rodder magazine and attended and covered the National T-Bucket Alliance’s T-Bucket Nationals for several years. I’ll venture that over the years Eric has written and photographed more T-Bucket related features in national publications than anyone.

No matter how you look at it, the Eric Geisert 1926 T modified roadster is legit! To say nothing of being kind of sinister looking.

I hung around the area long enough that I was able to catch up with Eric when he came back to his cool modified roadster.

It turns out that the GNRS was the debut outing for Eric’s roadster, which he’d been putting together over the previous six months. Although Eric refers to it as his “black ‘n blue” roadster it’s the description of bruised and beaten up, rather than actual color, which is more black and primer red. After Eric said he did the patina’d paint job himself my déjà vu moment started to come into focus.

Even though this modified roadster had a perfect survivor look it had much more nice detail than something that was just slapped together. After Eric revealed that he had purchased the car as a complete 11-year-old driver, things came into sharper focus for me because I had seen this same car in virtually the exact same location years before!

I had seen this same modified roadster at the 2016 Grand National Roadster Show. But it sure looked different now!

Eric wanted a truly traditional looking 1926 T modified roadster and set about to do away with some of the “cartoonish” elements that identified the Norm Roberts roadster I had photographed six years before. Aside from his patina paint job, one big change Eric made was to have the 17-inch front and 18-inch rear wire wheels black powder coated.

To my mind, Eric’s “black ‘n blue” modified roadster has a stealth look and to achieve that the small block Chevy glitz had to go. That was achieved by painting the finned valve covers black and replacing the chrome finned air cleaner with a stock ’57 Chevy air cleaner appropriately painted. And the silver powder coated megaphone outlet headers were replaced with a more subtle design in black, of course. The chrome side mirrors had to go as well.

Eric’s modified roadster makeover is quite different from the rear, especially with the addition of a vintage quickchange center section, as well as the very traditional looking tires. Of course, the vintage license plate is the cherry on top.

According to Eric, he’s lusted after this type of car for a very long time and finally did something about it. His decision to purchase a driver that already had many of the basic elements he wanted was a wise one. Eric even kept the bullet holes in the doors, but totally changed the entire look of the car without disturbing its original character. And that’s the takeaway for today: a T roadster is perhaps one of the best choices for purchasing a hot rod and then being able to apply your own creative touches to produce just the car you’ve been dreaming of.