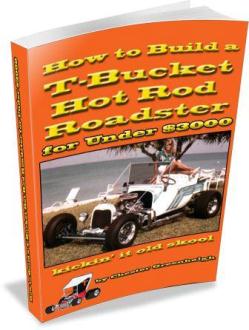 In case you hadn’t noticed, we’ve adopted a new cover for Chester Greenhalgh’s “How to Build a T-Bucket Hot Rod Roadster for Under $3000: kickin it old skool” eBook. It still has the same great content, but we made a few improvements.

The first improvement was to reduce the size of the eBook from 37 MB, down to just 20 MB for quicker downloads by customers and to take up less space on their PCs. Basically, we were able to do this by making the PDF compatible with only versions 8 and higher of Adobe Acrobat Reader. By the way, if you have a version of Reader that is 7 or older you should upgrade now because your Adobe Acrobat Reader is over 5 years old. That means you’ll find more and more PDFs you aren’t able to read and with old software you’re also vulnerable to problems. You can get a FREE download of the latest version at http://www.adobe.com/products/acrobat/readstep2.html.

We also took this opportunity to include Addendum 1 and Addendum 2 to Chester’s eBook that we had previously posted online here. We felt it would be nice to have them with the publication. Of course, we’ll continue to issue Addenda here as needed.

So, if you have the 25th Anniversary Revised Edition, which features the newly digitized content you’re good to go and don’t need to worry about anything when you see the new orange cover.