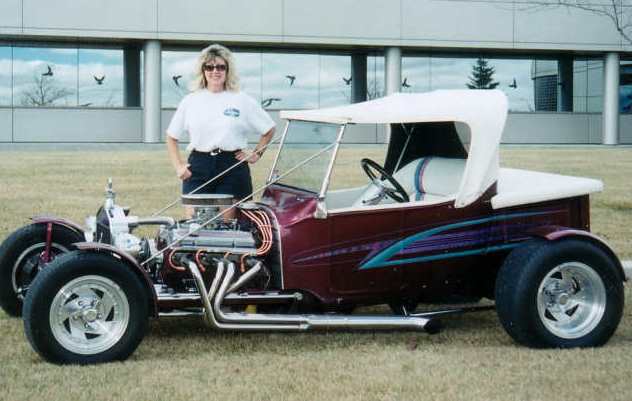 On International Women’s Day, we would like to recognize “Hot Rod Liz” Kitzul, who in 1995 founded “The Lipstick Run” as an event for female hot rodders to travel together to events throughout North America. Liz, of Winnipeg, Manitoba, Canada, has driven close to 200,000 miles in her own T-Bucket on all of the Lipstick Runs and this will be the Run’s 19th anniversary year. According to Liz, “Each year we hit a different car show – there are so many and all are excellent. We all have an exceptional time, visiting friends, going on shop tours, garage crawls, car shows and rod runs.” They’ve traveled to the East Coast, California, Kentucky, Washington, the Carolinas and many other states, including Arkansas for a visit with the late T-Bucket luminary Norm Grabowski, and they take in classic car shows and cruises for their event. They usually don’t participate in the same event twice as there are so many. Because it’s a bit out of the norm for a group of women to individually drive thousands of miles in their own street rods to attend events as a group, The Lipstick Run has garnered quite a bit of media attention over the years. Not only is her T-Bucket a dependable highway cruiser, but it’s also great to look at.

As “The Line Dr.” Herb Martinez describes it in his book, Herb Martinez’s Guide to Pinstriping Liz Kitzul’s T-Bucket “came all the way from Canada to my shop for work. I did it in dark magenta, Kansas City teal, and violet. The teal graphic was done in solid color and airbrushed with highlights and shades. The graphic in the front was an outlined splatter effect, and the violet panel graphic behind the teal was done in sponge and faded off on the ends. All the colors were used for the accent striping.”

Liz modestly describes her ride as, “purple T-Bucket, collapsible fold down top, belly-button engine, hauling my Tiltin’-Hilton. More specifically, it’s a Total Performance T-Bucket with a stock 305 Chevy and 3 speed automatic. Custom features include an extended pickup bed with hand made pull-hinge, frenched license plate, handmade dash, fenders, taillight treatment all by “Jimbo”. Other features include a stainless gas tank of 14 1/2 gallons for long-distance travel and Classic gauges, Ididit tilt, telescopic column with cruise control, and BFG T/A’s on Americans. Those custom graphics were laid down over PPG Wineberry paint by Cahill Body Shop that withstands driving to 47 states and 10 provinces. According to Liz, it’s “owned and built by a T-Bucket fanatic, who never gives up.”

In recognition of her inspirational rodding activities, Liz has been inducted into the Canadian Street Rod Hall of Fame and is also a member of the Manitoba Motor Sports Hall of Fame. At the 13th Annual Syracuse Nationals, Liz received their 2012 Highway Legend Award. In our own small way, on this International Women’s Day we would like to recognize Liz Kitzul as well for her contributions to the world of T-Bucket hot rodding.