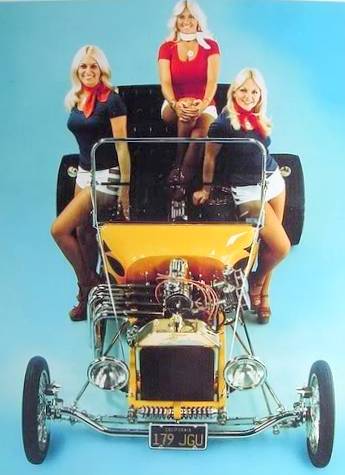 Linda Vaughn, Miss Hurst Golden Shifter, captured the attention of most male hot rod, drag racing and other motorsports fans in the 1960s and 70s, before cosmetic silicone enhancement became the norm. So, it was only natural in the ’70s after Hurst had expanded beyond motor mounts and shifters with the acquisition of the Airheart brakes, Schiefer clutches and Hallcraft’s wire wheel products to draw attention to that fact by featuring Linda Vaughn and the Hurst Girls adorning one of the most unique T-Buckets anyone had seen up to that time. And the T-Bucket caught as many eyes as “the lovely Miss Linda Vaughn”, as she was often introduced by Dave McClelland at the U.S. Nationals in Indy. Heck, that was no small block Chevy between that T-Bucket’s frame rails. Instead, it was a Pinto 4-cylinder with twin SU carburetors! And what about that unique, little-seen opposed coil front suspension? Was that cool or what?! To be honest, I was always fascinated by the look of that T-Bucket but knew nothing more about it until just recently. Most T-Bucket aficionados today would look at the front suspension and say, “Well, it’s a Dan Woods car.” And that would be wrong. The builder of this sweet little T was now legendary hot rod builder, Richard Graves. Richard Graves was an Early Times car club member like T-Bucket builders Danny Eichstedt and Dan Woods and worked at J&J Chassis in Cerritos, California back in 1973 when he started building this unique phaeton T-Bucket, T touring, or Tub-T if you prefer, in his 1000 sq.ft. home garage in Long Beach. At the time, Dan Woods also worked at J&J Chassis, which was owned and operated by brothers Larry and Roger Jonguris. In addition to Richard and Dan other notable J&J employees then included Ed Newton and Boyd Coddington. According to Richard, the opposed coil front suspension began with an Ed Newton cartoon rendering that was then designed and built into the working front suspension we know today by Larry Jongerus. And, if you’re curious who made those nice, sweeping headers it was none other than renowned T-Bucket builder, Ted Brown. Another of the notable J&J components at the time was the super deep-dish steering wheel that Richard chose to use in his T as well. 1973 was the beginning of the U.S. Oil Crisis brought about by the OPEC embargo that quadrupled the price of a barrel of oil by the next year. Gas stations ran out of fuel and when fuel was available cars lined up for blocks to get a fill-up and eventually odd-even rationing of fuel by license plate numbers was implemented. Needless to say, no hot rodder back then was planning to build a blown Chrysler hemi powered T-Bucket for the street. Thus, Richard chose the fuel-sipping 2000 cc Pinto engine and mated it to a conservative C4 transmission. Rounding out his driveline choices, Richard went with the Jaguar independent rear suspension which was also becoming quite popular in the early 1970s. In addition to having built several conventional T-Buckets already, Richard had also built a 1927 T touring that was featured in the same January, 1971 issue of Rod & Custom as Danny Eichstedt’s “Leg Show”. Having gotten used to having some passenger room, Richard purchased two fiberglass 1915 T-Bucket bodies, cut the cowl off of one of them, and grafted it onto the back of the other to produce his own 1915 touring body. Being good at collecting parts, Richard estimates he only had about $2500 invested in the Tub T build, but that was before chrome, paint and upholstery. Not long after completion in 1974 Richard’s handiwork gained tremendous national exposure as the centerpiece of the Hurst Linda Vaughn ads and it made good sense in light of its prominent use of such Hurst products as front Hallcraft wire wheels and Airheart brakes. It was such an eye-catching combination that it was even used by the National Hot Rod Association in some of its National Dragster ads. After a while Richard sold the T and it changed hands and has been pretty much out of sight for almost 40 years.

Now, however, the current owner who’s had it for over 30 years is ready to part with it. Talk about a great T with awesome history for some lucky soul!

Today, the T features a neat AiResearch turbocharger in place of the twin SU’s and still gets the awesome gas mileage it was built for. For example, from the Lakewood/Long Beach area to Laguna Beach on just a gallon of gas, which works out to 30+ MPG. But that’s without getting your foot into the turbocharger very much. According to the current owner the opposed coil front suspension and Jag rear suspension make for a very comfortable ride that’s night and day different from a buggy sprung T-Bucket. Of course, everything stays cool with an original Jim Babb radiator. The car has been meticulously maintained and another surprise is that it actually comes with a nice top for those extra sunny days. Everything sparkles as much or more than it did back in ’74. The upholstery has also been nicely refreshed. In my mind, this Tub T is the epitome of 70s T-Bucket style and with its body and engine combo is truly one-of-a-kind. I understand the asking price is $22,500 and the car can be shown by appointment at the HotRod Hotel in Costa Mesa, CA. It also comes with loads of documentation including copies of magazines in which it was featured in the ads. By the way, I’m doing this story because I think this is such an absolutely neat T with so much cool history and I don’t get anything for it. All I hope is that a true T fan will be able to satisfy their own craving for a totally unique T. So, if you’re a serious, no-trade buyer and want to learn more you can call, email or text vincentsdetailing7@yahoo.com, (714) 334-8358. Who knows? Maybe you can catch up with Linda Vaughn at one of her appearances and get your own nice shot of her in this T she made famous.