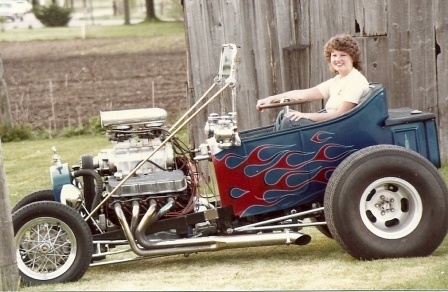 What a great way to start our new Let’s See Your T! series: a blown big block 1923 T-Bucket. This nicely flamed blue beauty belongs to Mike Ray of Hudson, Florida and was Mike’s first car build back in 1976 when he was just 20 years old. The next year found it with a blown 427 Chevy, 4 speed and Corvette rear. Shortly thereafter, it was making the treck to local drag strips like Bunker Hill and Edgewater Raceway Park. Of course, it wasn’t just all go. Mike also took home his share of car show trophies, thanks to that attention getting paint job and some nice chrome accents.. And to round things out as a true triple-threat-T, it was Mike’s Summer daily driver for over 15 years Mike says the, “car has been sitting for a few years and I am slowly getting it back into shape.” Mike has an awesome example of a great 70s T-Bucket he should be rightly proud of and we’re proud to have it kick off our Let’s See Your T! series.

So, if you’d like to share your T-Bucket pride and joy with all the T-lovers who visit here, just check out what we’re looking for at Let’s See Your T! — and let’s see yours!