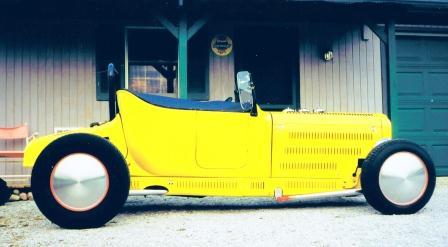 We’re happy to feature a great-looking little Track-T roadster in this second installment in our new Let’s See Your T! series. According to Jan Bristow of South Whitley, Indiana, “I really liked the Dick Kraft Track Roadster and the roundy-round cars from Southern California tracks of the thirties and forties. The vision I had was a Track-Roadster that a guy ‘just-back-from-WWII’ might have dreamed of for a few years.” Jan said, “The body, turtle-deck, and radiator shell are fibreglass. I believe mine may have been a competition intended body, because it was pretty thin. There was a Kellison sticker on the inside of the right door. As I recall it was Number 517, but I will not testify to the exact number. The body was molded with the right door separate; so maybe it was not competition style, but it was thin. I did a lot of wood/glass work inside.” “I found the body on a very rough chassis in an in-law’s barn. I had known about the car for ten or twelve years before I attempted to buy it in 1985. It had early-Ford running gear, front axle, springs and radius rods. The rear axle was a GM 10-bolt and the owner wanted to keep that. Once I got it home I scrapped everything except the body and the Ford stuff. The Ford suspension had been chromed though, pretty crudely; the springs were dipped intact … assembled. The chrome had some sort of clear plastic sprayed on it at some time so most of the chrome had survived pretty well in the barn.” “The hood, partial belly pan and deck lid are steel, bent around whatever was handy and close to the right radius. I bought a bead-roller, and made my own louvre-dies. I punched 428 louvres in the car over the years; most of them one Saturday night with a press at my work. I adapted the company’s hydraulic press to hold my dies.”

“Power was a 327 Chevy that I took from a guy’s Chris-Craft — it began life as in a Chevy Nova. The guy couldn’t get the boat to plane, so he was replacing the Chevy with a (lighter?) Pinto 4-banger. (He was asking $100.00 for the Chevy: I didn’t discuss boat-propellers with him.) The trans was a Turbo-350 followed by a ’39 Ford rear axle with a Halibrand Quick Change center section. The car had ’39 brakes all around and Kelsey-Hayes 16″ wires.” “I did ‘all’ of the paint in my garage, had a guy sew some pleats in bare Naugahyde, and adapted the cover from a Vega station wagon back seat. I managed to get a drivers position with my shoulder about even with the top of the bucket in the cockpit. I began the build in 1985 and drove the car first time in early-Summer 1990. I drove the car from 1990 until 2002 when I sold the car and it disappeared into Colorado.”