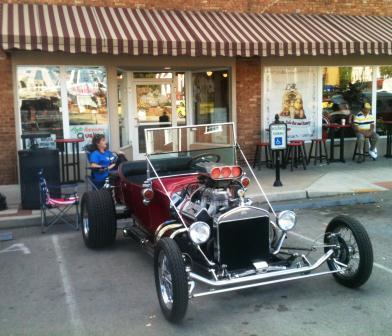 For Troy and Ginger Scott of Hopkinsville, Kentucky hot rodding is a family affair and one thing that brings them together when the weather’s pleasant in Western Kentucky, which enjoys what a true Fall and Spring ought to be (as opposed to the two weeks of each we get in the upper midwest), is their sharp red T-Bucket that we’re happy to feature in today’s Let’s See Your T! segment. This particular T has all the trademarks of a classic Total Performance T-Bucket build. In case you’re not familiar with what defines a Total T, some of the major elements include the reversed steering arms that put the tie rod out front, the friction shocks, the radius rods design and positions, the Pittman arm pointing down with drag link angling up, and the rear coil spring suspension that offers a better ride than the traditional transverse “buggy” spring. Of course, the accommodations on the body for mounting rear cycle fenders are another distinctive Total Performance feature. But most distinctive is the overall subtle rake of the car that gives it the sense of motion even when at rest. According to Troy, it’s the family cruiser as you’ll see in this Kentucky backroads shot taken on an outing with his daughter. But the T isn’t alone in the Scott family hot rod hobby. They have a Chevy Nova drag car that Ginger races and a Junior Dragster their eight-year-old daughter pilots. On occassion, they use the T as a pit vehicle: you may have noticed the telltale drag strip white shoe polish lettering on the T’s windshield in the first photo above. But, they haven’t made a timed pass with the T — yet. It should do alright, though, from a performance standpoint with its 383 cubic inch small block engine breathing through that tunnel ram. Troy noted those are Larson Engineering valve covers, which are a unique two-piece design that, as I recall, was introduced in the early 80s. One of the marketing points was that you could get the big block look without changing engines. Coincidental to the T-Bucket world, the man who pioneered the whole idea of using such dress-up fascia on a small block Chevy engine was Ted Brown who unveiled them to the world on his T-Bucket that was featured on the August, 1968 cover of Rod & Custom magazine as the “Trick T of the Century”. Later, I believe the Larson valve covers were also marketed by Total Performance. True to its weekend cruiser role, daughter Tala Scott is waiting on Troy for an outing to the local Sonic Drive-In. Of course, as sharp looking as it is the Scott’s T-Bucket can be found as well at local shows and events. It’s just a great example of how a nice T-Bucket can provide not only tons of fun, but also utility, while bringing the family together for some shared enjoyment as well.

But what’s unique to you about your T-Bucket? Is it how it’s built? Or, is it the story of how you found it or traded for it? Maybe it’s something special you designed for it or did yourself and saved a lot and learned in the process. We want to hear from you. Let’s See Your T!