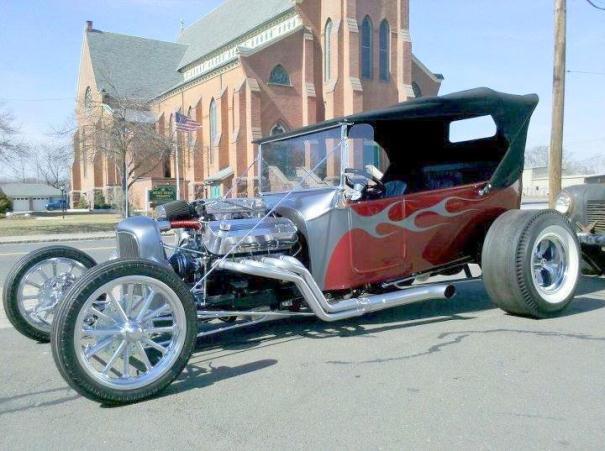 This great looking 1923 T-Touring belongs to Brian, Fiona and Samantha McAllister of Southington, Connecticut, and it’s another good Let’s See Your T! story because it didn’t used to look this way at all. Brian’s T started life as an award winning, magazine feature car, that turned heads and drew a crowd when Brian was a salesperson at Total Performance before Speedway’s purchase of the company. The car featured a Total Performance chassis, with chrome front end and a painted spring. The Fuel Injected 454 LS6, is hooked to a 350 turbo w/ 3,500 stall. A few years back, they drag raced the car to show the quality of a Total Performance “T” powered by a 500 HP engine. The results showed that you can run low 10’s at the track, and cruise the main drag on the way home.

But then Brian’s family got larger than 2 people and NOBODY wanted to give up the T! So what to do? According to Brian, “we just made her bigger.” And they did that by converting his standard T-Bucket into a 4-seater Touring T using the clever Wintec Roadster body and components. Now, there’s room for four and family outings are a pleasure. What’s a nice bonus is that Brian’s T still draws a crowd at shows and when cruising. With the Wintec Roadster conversion most all the driveline components remain the same, with Wilwood polished discs in front and drums on the 9″ Ford rear. It just goes to show you that your enjoyment of T-Bucket hot rods can continue when the family expands, as long as you apply some creativity to the solution. But, this is just one aspect of what motivates people to embrace their T-Buckets. Now, we want to hear your story and Let’s See Your T!