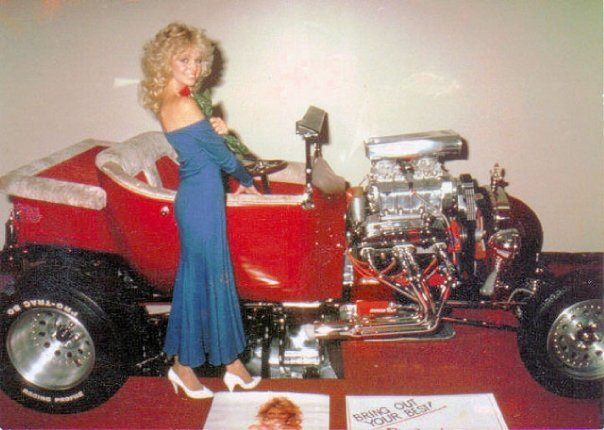 I love a T-Bucket with history and Bobby Field’s “Nas-Tee” certainly has one which we’re happy to feature in our Let’s See Your T! series. According to Bobby of Londonderry, New Hampshire, this is the “1923 Ford Model T Roadster Pick-up that I built back in 1978.” In these early construction pics, it appears that the frame and suspension for this bucket may have been based on the Dick Scritchfield series about building a T-Bucket that ran in Car Craft magazine back in 1967/68. What made that particular construction unique was the use of Corvair coil springs at all four corners, which from the front gave an appearance somewhat similar to the Dan Woods coil springs used on Ed Roth’s “Druid Princess” show car. According to Bobby, his chassis was “built from scratch, molded all one piece with no welds showing, and all corners ground smooth. It was finished in a white base with pink pearl paint.” It was quite unique because it featured power steering, power brakes and a tilt wheel steering column. In keeping with becoming a show car, Bobby noted that it was built with “all chrome brake drums, heck …. even the u-bolts on the driveshaft are chromed!” While one might wonder today about the use of power steering on a T-Bucket, when you look at those massive Goodyear front tires you see why it was a good thing to have, despite the T’s nimble weight. The body was finished in a stunning Candy Purple. And the interior featured champagne and burgundy velour upholstery. Once completed, Bobby and his “Nas-Tee” hit the show car circuit where they did quite well — and got to meet a few celebrities along the way. Shown here at a World of Wheels event with Bobby’s T is actress Teri Copley who starred in the ’80s television series, We Got it Made. And here’s Bobby in an envied pose with Heather Locklear who was starring in both the popular T.J. Hooker and Dynasty television series in the ’80s. In the ’90s, Bobby did some freshening up of “Nas-Tee” and this is pretty much how it looks today. Discoloration on the chrome headers is evidence it can be and is driven. While it was built as a show car, Bobby invested heavily in building a full-on high performance engine that cranks out 800 HP! With a 6-71 blown 383 cubic inch small block all that horsepower feeds into a B&M powerglide transmission. This is what 800 horsepower looks like: with 2-600cfm Edelbrock Endura-Shine carbs feeding a Mooneyham 6-71 Blower updated by BDS, pushing fuel mixture into AirFlow Research aluminum heads with Crane roller rockers, activated by a Howard Cam operating from a Pete Jackson geardrive. It’s then fired by a Vertex magneto and pushes Aries pistons on Childs & Albert aluminum rods, spinning a 383 Callies stroker crank. Not bad for a show car! Loads of chrome and power steering for those big tires! While we may focus on building T-Buckets on a budget, we have a huge appreciation for those that are built with the refinements that penny-pinching won’t permit. I think Bobby has a great T-Bucket that’s provided him with many years of enjoyment. When you amortize that big investment out over time it’s probably less than what a lot of guys spend playing golf every summer — and you get something to show for it. We appreciate very much Bobby sharing the story of his T-Bucket with us and now we look forward to seeing and hearing about yours. Just click the link and Let’s See Your T!