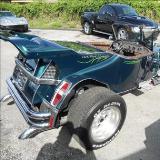 I was surfing eBay T-Buckets when I ran across this strange conglomeration identified as a “1927 T-Bucket Lincoln“. The Human Centipede is a notorious 2010 anatomical-nightmare horror movie about a psychotic surgeon who surgically attaches people to form the title “creature”. In this case, a 1927 T roadster body has been grafted onto a modern day Lincoln front end and a 1960s Oldsmobile Toronada front end. Confusing? Yes. You see, the Toronado was a front wheel drive V8 passenger car and in this creation the engine and drive assembly are mounted at the rear and provide the vehicle’s only driving power. I know, you’re wondering about the engine up front. Well, as it turns out, the front mounted engine is a dummy. Yes, your head’s probably spinning by now. Yep, the big Olds is hidden underneath that bizarre whale tail. So, from the rear this kind of has the same appearance one gets when passing by a Corvair or VW-powered three-wheel-cycle. I guess what’s equally surprising is that this car wasn’t just schlocked together, as you’ll note from the nice interior view. Evidently, somebody had a vision (inspired by who knows what) and supposedly over $40k was invested in bringing this to reality. But, hey, there’s always a bright spot. If you act quickly, you can check it out on eBay and “Buy it Now” for only $18,900. And, if you’re like most of us who slow down to gawk when passing somebody’s misfortune, then you can indulge yourself a little more with this informative video — “it’s got strobe lights”.