Hey, nobody’s perfect. But it sure is nice to strive for perfection. Today, we had a question from a recent purchaser of Chester Greenhalgh’s “How to Build a T-Bucket Roadster for Under $3000” and it prompted me to start a new category of blog posts here: Chester’s eBook Addendums.

The purchaser’s question was, “I’m having difficulty with the section on rear shock mounts (page 39). Could you perhaps clarify this procedure?” I quickly re-read the page and while I may be a little closer to Chester’s plans than most readers it did hit me that this small section could use some more clarity to make it even more useful.  The particular section of the eBook read as follows:

“Now we move on to the rear shock mounts. With the frame on its side, measure back from the rear of the frame and mark 3 1/2” with a square, as in the photo on page 31.

Set a bracket on the forward side of this mark, with the frame laid on its side. Align the bracket with a square and spot weld the ends to the frame. Double check their squareness, then weld the brackets solid.

Now cut two 3/4″ long pieces of 3/4″ pipe. Weld a 3/8″ washer (flat) on one end of each piece and clean them up with a grinder. Set these tubes up against the rear shock brackets, facing the rear, and run a bolt through the holes to align them. Tighten a nut on them to hold them in place and weld them solid.”

So, I decided to do a quick drawing to illustrate what Chester wrote in his eBook and sent the following response: “I’ve attached a drawing I did to help clarify the rear shock mount arrangement. Basically, the 3/4″ pipe with a washer welded on the end is where the shock is mounted. Hopefully, my crude drawing will clarify the procedure.” 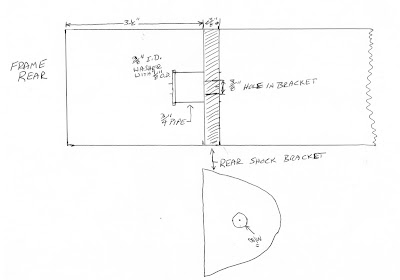 –>Click on the drawing to see a larger version.