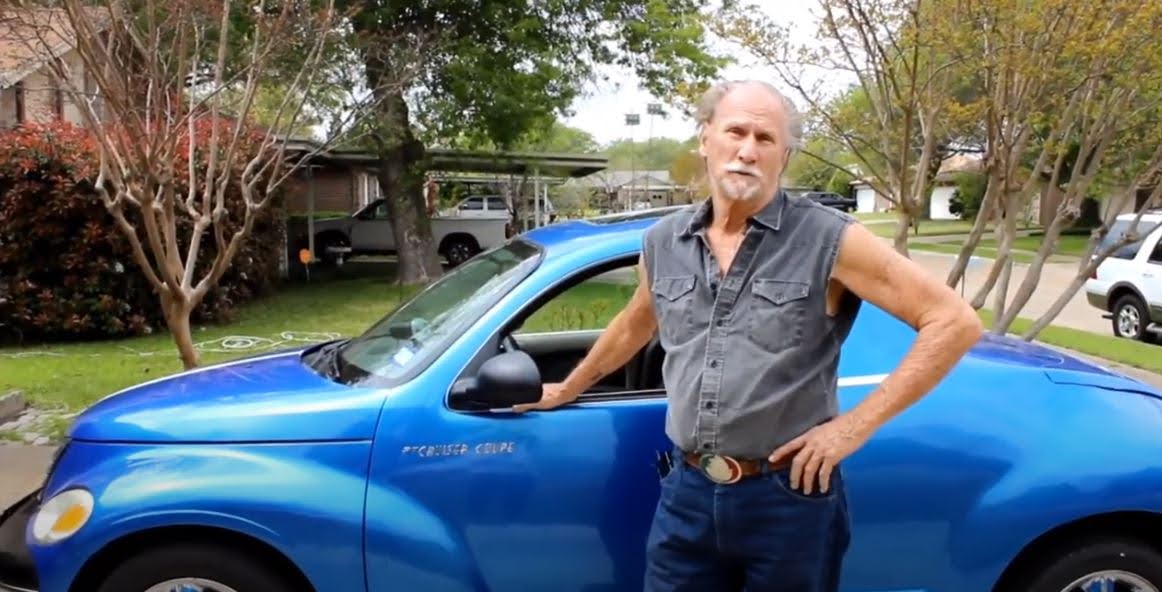 If you’re a regular visitor here, you know that Chester Greenhalgh is the author of the T-Bucket bible, How to Build a T-Bucket Roadster for Under $3000. I was saddened to learn recently that Chester had contracted COVID-19. He was admitted to the VA hospital in Dallas and after a few days, over their protestations, he released himself and continued receiving oxygen in home care. I’m glad to report that he’s doing better but it’s still a struggle and I pray he fully recovers soon.

Chester and I have been friends for over 12 years and this tragic event made me realize I haven’t really explained our relationship and how it has developed in light of Chester’s never-ending budget hot rod building quest. But first, a bit of Chester’s car building history.

Chester’s first hot rod was a 1922 Dodge bucket and pickup box on a Model A frame with 1940 Ford flathead V8 and running gear that he and his brothers built in Nevada the 1950s.

With scrounged parts and a cash outlay of only $50, according to Chester, “it wasn’t ‘California’ and it definitely wasn’t magazine quality, but it could leave 20 feet of rubber anywhere, anytime and was a hell of a lot of fun to drive!”

Not long after, Chester opened Chet’s Car Craft in Naples, Florida to build T-Bucket hot rods for people who enjoyed his own.

There was so much interest in Chester’s T-Buckets and T-Buckets in general that he decided to document every detail of how to build a T-Bucket on a budget. There had been other T-Bucket plans before, but they were mostly just confined to building the chassis and suspension. What about everything else? From battery box to building your own windshield frame, Chester covered it all.

This was a huge undertaking and Chester chose to document the building of a T-Bucket for his wife at the time, who liked the car but thought his idea of writing a detailed “how to” book and self-publishing it was a monumental waste of time.

Chester completed his goal and his “How to Build a T-Bucket” book was well-received by hot rodders and captured the attention of an established book publisher who came out with a paperback book version that was available in bookstores everywhere.

Problem was, on the cover of this budget hot rod book, the publisher had a photo of a stunning T-Bucket that sported a highly chromed supercharged hemi engine. To make matters worse, it was a Total Performance based T-Bucket. Oh, and they decided to edit out a bunch of Chester’s original content. Eventually, the book went out of print and Chester left the world of hot rod building to go all over the country building golf courses. Then he retired to a remote village in Mexico and to the rest of the world had disappeared.

So with Chester’s book being out of print it was much-desired and hard to find. Then along came eBay and Amazon and used copies quickly were being bid up by rod builders in need and were selling typically for $200 or more. I know, because that’s what I had to pay for mine.

I loved Chesters book! I saw a couple of Amazon reviews that I thought were off-base and on my personal blog pointed out that the reviewers didn’t quite understand what they were talking about. Sometime later, I got a message through my blog from Chester — the guy everyone thought was long gone. He’d come North of the border to visit his wife’s relatives for the holidays and someone introduced him to a computer and the Internet. Out of curiosity, he put in his name and saw my nice comments about his book.

That’s when our friendship began and we worked together to update his original book and make it available as an eBook so that anybody could afford it. And TBucketPlans.com started out as a one-page website for Chester’s eBook. Well, when that took off Chester had another budget hot rod idea he was ready to commit to print.

That led to our introducing “Hot Rod or Rat Rod, How to Mount a Cheap Antique Truck Body on a Late Model Pickup Chassis“ as Chester’s second eBook. In that one, he takes a field find junked Jeep pickup and shows how to put in on a later model Chevy sedan chassis. And that did well, but Chester found a classic Chevy Apache and just had to move on to another new hot rod truck project.

When Chester Greenhalgh got hold of that Chevy Apache he had visions of 1950s custom trucks like the Barris “Ala Kart” and “Kopper Kart” and especially the Rod & Custom magazine “Dream Truck”. But, Chester stayed true to his budget-building ways and produced “How to Build a Full-On Radical Custom on a Beer Budget!” Speaking of radical custom, he even shows how to build your own gullwing doors!

After building his two hot rod trucks while still at his retirement hacienda in Mexico, about that time the cartel violence was getting to the point where it just wasn’t safe for a six footer to be the only “gringo” in town, so Chester moved to temporary accommodations north of the border. Without access to his tools and garage, he still wanted to keep busy with hot rod-inspired projects. Thus was born Chester Greenhalgh’s “Projects with Lawn Mower Engines“. After seeing dumpster bins full of Briggs & Stratton Engines for next to nothing Chester applied his creativity to everything from a hybrid bicycle-lawn mower to a paint compressor and a unique outboard motor, to name a few.

While still staying in Texas with very limited tools Chester spent a great deal of time trying to figure out what the hot rod of the 21st Century might be. You know, something cheap and cool looking but also with creature comforts and the safety of airbags and antilock braking. And he discovered it in the forlorn PT Cruiser — but that sedan look just didn’t cut it! So with a $100 Harbor Freight MIG welder, the most basic tools and working in just a carport Chester put together his 5th eBook on how to build a 1930s style coupe with 21st Century technology and creature comforts, in less than 6 months on a budget under $3000 (which includes $1500 for a donor car). We honestly think that Chester Greenhalgh’s “How to Build a 3 Window Coupe for Under $3000 in Your Home Garage” might be ahead of its time. But when you think about it, it’s definitely the best way to do it on a budget.

To me, Chester Greenhalgh’s a one-of-a-kind friend and business partner because he’s always looking out for the guy that wants to build something cool looking with the bare minimum of cash. In addition to the blood, sweat and tears he puts into these eBooks he puts his heart and soul into it to cover all the little details for the home builder that most don’t even think about.

I’m confident that Chester will kick Covid for good and, hopefully before long will be on to his next creative hot rod “how to” project.

Thanks, and if you’re already a Chester fan you can leave a “get well” wish in the comments below.