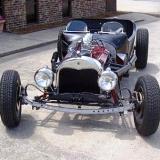 Deferred gratification is a trait common to my generation. But this blog is about T-Bucket hot rods, not psychoanalysis, so I’ll get to the point. In his late 60s, after a career in the newspaper industry, yet still active and looking for exciting new challenges, Branch Richardson of Greenville, North Carolina decided it was time to fulfill his hot rod desires. Branch had exercised his long-term automotive love affair by owning MG, Triumph and Porsche sports cars that he “hot rodded” with performance cams and suspension modifications, but the time finally came for a true hot rod. Turning to the Internet, he found NEHR Speedcraft and their “Hot Rod in a Box” 1923 T-Bucket kit. Not wanting to build from scratch, but also wanting to get his hands dirty and really personalize his hot rod in a number of areas, Branch discussed his interests at length with NEHR’s Tom Kuhr and decided to purchase his “Hot Rod in a Box” just in time because one of his friends was driving to the Detroit Autorama and agreed to trailer the kit back to North Carolina. From his sports car days, Branch had acquired a dual-glass racing windscreen that looks right at home on the T-Bucket cowl. To go along with the abbreviated windscreen he uses a pair of driving goggles left over from when he raced a TR3, although he’s working on a way to enlarge the windscreen while maintaining the cool look. Branch painted the frame himself, as well as the front I-Beam axle in a contrasting finish. Branch further personalized his hot rod with some sharp looking front wheels from Speedway Motors that look like the old spindle mounts, but have a safe 5-lug mount. He also picked up some great looking big chrome headlights with integral turn signal lights from Speedway and they complement the chrome Model A grille shell nicely. Of course, Branch supplied his own engine and transmission and chose a ’63 Chevy 327 to get down the road. To further accent the nicely detailed engine, Branch added an engine turned aluminum firewall that was made using a Scotchbrite pad in a drill press. “Everybody has a four barrel,” said Branch, noting why he chose the more nostalgic looking three deuces. Branch also lamented that, “those Strombergs are no longer cheap carbs.” It runs primarily on the center carb with progressive linkage and Branch said you better hold on when he gets his foot in it because with only 1700 pounds total vehicle weight that 327 really hauls. Branch already had a couple nice bucket seats left over from a sports car and has nice things to say about NEHR’s unique “speed blister” and how it really makes life much more comfortable in a car with an automatics transmission that takes up much foot room in a body that was originally designed back when a person’s average height was close to only 5′ 6″ and they sat upright and high in the body. “I’m 6′ 1-1/2″ and 180 pounds and it’s very comfortable,” enthuses Branch. Branch added more engine turned aluminum to accent the dash and notes that the NEHR grab-handles on the dash and above the steering wheel really make entry and exit from the low-slung body easy. It should be noted, too, that with a decent fiberglass body wooding is primarily needed for upholstery attachment and tall post windshield support and that most of the body strength comes when the floor is bonded. The integral transmission and driveshaft cover is part of the overall body support/stiffening scheme. At the rear, the transverse spring and the drilled upper shock brackets are key features of the clean, utilitarian visual effect that says “hot rod”. After receiving his kit, Branch did some basic body cleanup and had 3 coats of semi-gloss black lacquer applied for a nice traditional look — all complimented nicely by the Coker wide whitewalls. The first week after completing the work on his “Hot Rod in a Box” Branch drove it over 400 miles. “It’s well-engineered, looks good and drives great,” said Branch. I think you’ll agree that although NEHR calls this a “kit” that just means that the major parts are there and have been designed to work together. The rest is up to the builder and in Branch’s case the result is a traditional looking T with a hint of sports car flair that really is an out of the box T-Bucket.