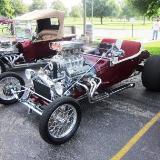 While checking out the scores of cool T-Buckets at the 2011 T-Bucket Nationals in Dayton, Ohio, I just had to stop and admire the work of Mike Reynolds of Lexington, Kentucky: not because I’m a U.K. alumnus but because I was crazy about all the well-planned detail Mike had put into his T. I’ve already said that I’m all about unique front end detail and Mike had done it in spades. From the elegantly slim looking spring perch to the well-blended wire wheels and disc brakes and the behind-the-axle tie rod in front of a nicely chopped and chromed grille shell, set off with headlights from a European sports car as a nice touch since those are what Mike works on for a living. And while continuing to admire the whole affair, I noticed the little center mounted stabilizer bar under the axle and wondered why that might be necessary. Then, all I had to do was step back and take a side view. You see, Mike’s T front suspension is stabilized by those sleek single-bar radius rods, like those you would have found on a Kent Fuller torsion bar sprung dragster in the 60s. Now, that’s unique and cool. And, if you look closely at the front crossmember and frame horns you’ll see that they have a nice peak for an extra touch of style. As a turtle deck T, this one gets extra credit for that, too. You just don’t see that many turtle decks, compared to T pickups, although that’s the style preferred by Dale Wigfield as well. Mike’s luggage rack indicates this bucket can get around and the fire extinguisher location is incredibly practical. Although listed as a ’23 T, to me Mike’s bucket looks more like the ’15 era model with it’s higher back and the lower and somewhat deeper cowl. The interior is just as nice as the exterior with a sophisticated dash treatment and gauge cluster focused on the traditional Model-T steering wheel. And who couldn’t miss the blown small block Chevy motivating this T-Bucket with horsepower to spare. But, enough of my limited skill digital photos. If you really want to revel in the glory of this T-Bucket’s beauty and its awesome supercharged Chevy engine just click to play the video below:

We’re just getting started in our coverage of the especially cool hot rods at this year’s T-Bucket Nationals, so be sure to come back for our next installment. Just to be safe, if you don’t want to miss our future posts look for the link below to Subscribe to Our RSS Feed. That way, you won’t miss anything because we’ll be sure to send you a quick update when something new is posted.