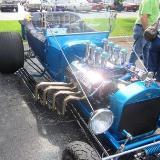 So on June 25th, I took my own advice to attend the 2011 T-Bucket Nationals in Dayton, Ohio, and was happy that I made the trip. While I didn’t count the buckets, it was the largest turnout of T’s that I’d seen at a Nationals event. What surprised me, though, was the turnout of locals to see the T’s was pretty small. I’d owe that to the fact that it was in a hotel parking lot and just didn’t have the drawing power of being at a place like the Fairgrounds in a small town like Mountain Home.

I took over 300 photos and 11 short videos, which I will start posting here in a new multi-part report.

First, though, I want to explain how I covered this event. While there were lots and lots of really nice looking T-Buckets there (and a few that were not-so-nice), I decided to focus on the ones that had unique features that the followers here at TBucketPlans.com would find interesting and possibly inspiring in their own T-Bucket projects. I also focused on buckets that, to my knowledge, hadn’t gotten much exposure among the T-Bucket rank-and file, with the exception of a couple that people have heard a lot about, but haven’t really been seen much up-close-and-personal.

Plus, I’d rather do complete coverage on a few really great cars than just post one or two pics of many. So, my apologies to guys like Win Scott, whose stainless steel T is one of the most innovative to come down the pike in recent years and quite a few other notable ones. With that said, let’s get on with the pics! I’m starting with one of my favorites, which I came upon as a happy youngster was taking a turn behind the wheel of this beautiful, blue Ford “cammer” powered 1923 T-Bucket pickup. Owned and built by Dale Wigfield of Schellsburg, PA, this Ford-powered T-Bucket had lots of innovative and interesting details — starting with the super-rare (expensive) Ford SOHC engine! In keeping with its built-for-racing heritage, Dale’s SOHC Ford engine sports mechanical look fuel injection, with modern workings. And those super-swoopy headers were fashioned by Dale from some stainless steel boiler tubes or similar material. Dale’s T uses a frame that’s loosely based on the CCR design with long front and rear hairpins, but that’s where the similarities end. I’m the kind of guy that the first thing I look at on a T-Bucket is the front end. After all, being totally exposed it’s the focal point of just about any T-Bucket hot rod. And chances are, if your T’s front end is a little different from the rest you’ve gotten my full attention– and Dale did. At first glance, it looks like Dale is running an opposed coil front suspension of the old Dan Woods or J&J Chassis design, but not really. Take a closer look at Dale’s unique opposed coil front suspension, and then take a look below at the Dan Woods version that I photographed a few years ago. And while you’re looking at Dale’s, spend some time checking out how nicely he molded the bat-wing brackets into the front axle. What Dan Woods did was build a special coil spring mount into the front crossmember. Then, he added stubs on the ends of the front frame rails to mount the pivot points for his suspension bellcranks which terminated on stubs that were welded to the front axle. And by using the long front hairpin-type radius rods, Dale doesn’t need to use a front center stabilizer rod like Dan Woods did but, then again, Dan utilized some Kent Fuller dragster-inspired single radius rods, which you’ll see on another T if you stay tuned for our next report. Another thing I like about Dale’s T is the nice upholstery roll over the top of the body. And with that innovative front suspension, fat chance that Dale would go with a conventional straight axle rear end when a beautifully tweaked Jag would work even better. Speaking of nice details, take a gander at how smoothly Dale’s incorporated the windshield stay rod mounting into his headlight bracket. And if you like this T-Bucket half as much as I do, then you’ll really enjoy the video tour of it below.

So, my hat’s off to Dale Wigfield for helping make make my day at the T-Bucket Nationals, along with some more you’ll be learning about when we post our next part in this series. Stay tuned.