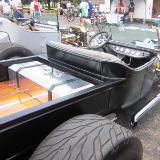 Quick now, what looks different about this T-Bucket? If you’re focused on what’s behind the body you’re on the right track. While most people debate whether to attach a 14″ or 12″ pickup bed on their T-Bucket, Donnie Jenkins of Zanesville, Ohio, thought “why not make it something I can actually use?” And that’s not all Donnie did that makes his T just a bit different. But many of his tricks are like the pickup bed — they just don’t jump out at you, but after standing back and admiring this bucket a bit you start to see the nice, subtle differences that make it so cool. However, benefit number one of that longer pickup bed is being able to include a larger fuel tank than the typical 10 gallons. If you study the pickup bed, you’ll realize that Donnie didn’t just extend the typical one but rather constructed his own high-quality thick-walled bed. Take a look at how beautifully it’s molded to the body. Then, take a look at the beautiful wood floor with the chrome straps — a totally unique T-Bucket treatment. The interior is clean, restrained and functional and appears just as roomy as the pickup bed. Up front, you get a very traditional look with the stock, undropped I-beam front axle. So, how can it look so low without being dropped? Aha. Keeping with his subtle change theme, Donnie has z’d the front of the frame to get it down low overall. If you don’t think Donnie plans some serious driving in this T, take a look at that double-thickness aluminum radiator. By now, you’ve probably also noticed that the gray flames perfectly match the tasteful gray interior. All in all, Donnie Jenkins’ bucket earns the name “1 KOOL 23”.