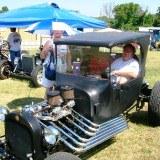 So, should you call Ernie Hummel’s slant six powered Dodge roadster a D-Bucket? In my mind, it’s still a T-Bucket, but in a very unique category for a number of reasons. But first, just in case you don’t know what a 1920 Dodge roadster looks like here’s an example of what was the basis for Ernie’s bucket. One reason Ernie’s bucket is unique is that it’s driven everywhere. I’ve seen him in Omaha, Mountain Home and now at Dayton. Literally, he’s always driving it. In fact, I was never able to get any good photos at all the T-Bucket Nationals because he was always heading off someplace. (That’s why I’ve mostly used other people’s photos here). In fact, I only recently learned Ernie’s name, thanks to “Photoman”, Dave in Texas. Ernie hit it out of the park on uniqueness when he chose the Dodge slant six to power his bucket. It’s visually impressive, especially with the individual header pipes and its reliability is born out by the fact that Ernie’s been running it for 29 years! At the recent NTBA T-Bucket Nationals, I was quick enough to whip out my video camera as I approached Ernie’s T, but as you’ll see he wasn’t letting grass grow under his tires because he and his wife, Linda, who accompanies him to all the events, were off again. I hope you enjoy this cool little bucket as much as I do.