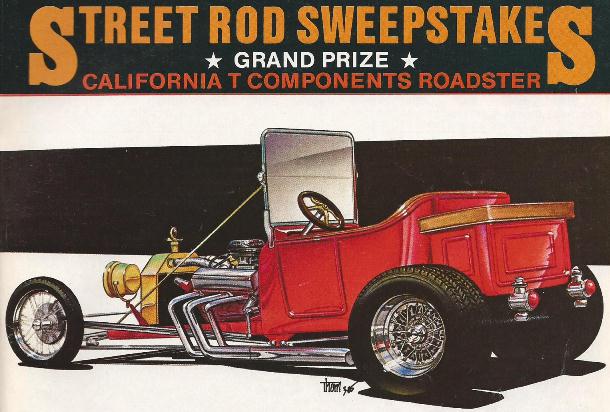 While the 1980s may have been the decade of the “fat fender” phenomenon in the hot rod world, the “Fad-T” fanaticism that burned white-hot in the late ’60s and the ’70s was still smoking. So, it was only natural that when STREET RODDER magazine announced a sweepstakes giveaway car in its August 1985 issue that it was a terrific looking T-Bucket. The fact that they enlisted the talents of famed hot rod illustrator Thom Taylor to show what the finished product would look like made one’s mouth water even more while ripping out and filling in the Official Entry Form and conveniently re-upping the SRM subscription at the same time.

The builder of this T-Bucket was California T Components, a Cypress, California shop established in 1983 by Jack Webb, a hot rodder (not the Dragnet detective) who had been building rods since the 1960s and had begun selling some components of his own design for T’s as well as building everything from rollers to turnkey T-Buckets. Of course, if you were the lucky sweepstakes winner you had to get yourself to California the following Spring to take delivery of this jewel of a T-Bucket at the Tom’s Fun Run #9. Who wouldn’t?

But, conveniently for him, the car was won by Bill Foutz of Boulevard, California in April 1986. According to Bill Sands, who owned the car only a short time before selling it to the current owner, “Bill Foutz owned the car until 1990, at which time he sold the car in a California collector car auction. The auction winner purchased the car as a personal toy for a well known Seattle exotic car dealer who promptly put it in the back of his shop for a number of years. He sold the car in 1996 to a man in Redmond, Washington who also did not drive the car very much. The car then went to another collector in Redmond, and then was subsequently sold to a gentleman in Middleton, Idaho and then another gentleman in Idaho and finally to me.” Bill Sands then sold the car to its current owner, Brian Brown, who lives in the Baltimore, Maryland area. That the T looks so good today is great. I recall the Coca Cola Levis Denimachine van sweepstakes that ran in Hot Rod magazine back around 1976. I used to see one frequently in the Chicago area in the early ’80s, but by then it had turned to junk. Other than the air cleaner and valve covers being changed, everything on the ‘Project California T” today looks pretty much just like it did over a quarter century ago (makes it sound ancient, huh?). Their absence could be attributable to the fact they were specially milled by Boyd Coddington. Maybe someone had an offer for them too good to refuse. At least the Boyd-milled firewall is still there. It’s interesting to note that for all intents and purposes the California T Components chassis looks like it is based on the earlier California Custom Roadsters T-Bucket Chassis Plans. The front view is dominated by the Wellbaum brass radiator and matching headlights. You’ll note the front wire wheels appear a bit beefier than the typical Hallcrafts and that’s because they’re Harley-Davidson with hubs machined by Jack Webb. At the rear is a Ford 8″ suspended by Aldan coil-overs with California T Components’ own special rear disc brake rotors. Steering is by a reversed and nicely polished aluminum Corvair box and the engine is a Chevy 350 with Sanderson headers. You can also see some of the Boyd-billet firewall detail in the above view. Coincidentally, I understand that Jack Webb later teamed up with Boyd. The interior is what might be considered conventional tan T-Bucket but the highlight is the milled gauge panel — another Boyd Coddington contribution to the project. A California T Components designed shifter is mated to a Turbo Hydro 350 transmission. The Project California T made for a stunning STREET RODDER magazine cover in October, 1985 and this T is a great example of some of the higher end builds being done at that time by California T Components, as well as California Custom Roadsters who would build the 1987 STREET RODDER sweepstakes T-Bucket. If you happen to know the whereabouts of that T, please let us know because we’re planning to do a story on it as well.