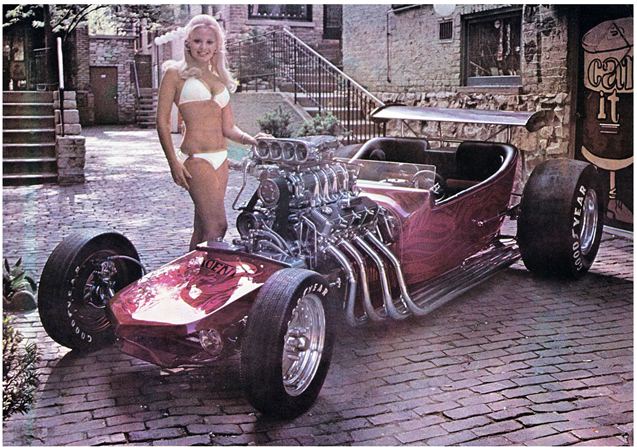 In the late ’60s, Harry Willett was service director for Chicago’s largest Buick dealer and at night in his home garage he was applying stunning paint jobs to most of the funny cars being built in Chicagoland at the time. He’d also built a wicked fast little T-Bucket street rod that was powered by a blown small block Chevy that he took on rod runs and entered in the occasional car show. That 1923 T roadster pickup was named “Easy Pick Up” and will be the subject of another story here very soon.

But, as an avid hot rodder Harry wanted to build another 1923 T roadster street rod. It was the early days of the National Street Rod Association and he wanted to build a street rod with a racing influence and a different style from anything else on the street. After working on it in the evenings after his day job and his side custom painting jobs in his home garage, some 18 months later the “Phoenix” appeared on the streets of Chicago in 1972. Through his work painting funny cars, Harry looked to legendary hot rodder Romeo Palamides as a mentor and the Phoenix sported a truly innovative 4130 chromemoly round tube frame with torsion bar front and rear suspension and a big block Chevy engine that was blown, injected and chromed to the hilt.

With the custom frame and suspension the T body was radically low and sported a distinctive Indy car influenced nose fabricated by Harry. In keeping with his goal of a car with a strong competition influence it also had a distinctive rear wing.

But, keep in mind this was a home garage built car Harry had planned to use for NSRA rod runs. Fred Focchi, a fellow member of “Street Rods Ltd.”, the car club Harry belonged to, talked Harry into bringing the Phoenix to the big Chicago World of Wheels car show. Of course, it was a big hit!

While at the show, Harry met Joe Konkel, an official with the International Show Car Association (ISCA). According to Harry, “Joe talked me into bringing the Phoenix to the Detroit Autorama at Cobo Hall. That’s the show where the prestigious Riddler Award is presented. To be eligible for the Riddler Award you must be showing the car in competition for the first time. I was unaware of this when I brought the Phoenix to Cobo Hall, so the Phoenix was not eligible for the award. However, the Phoenix did beat the car that won the Riddler by winning Best Rod at the show.” Harry continued on to six more ISCA shows in the 1972-73 season and ended up ninth in the overall standings for the championship. “That was it. I was hooked on car shows!,” said Harry. But this is just the beginning. Stay tuned and you’ll learn more about how Harry and the Phoenix evolved in the show car world — it’s a great story.