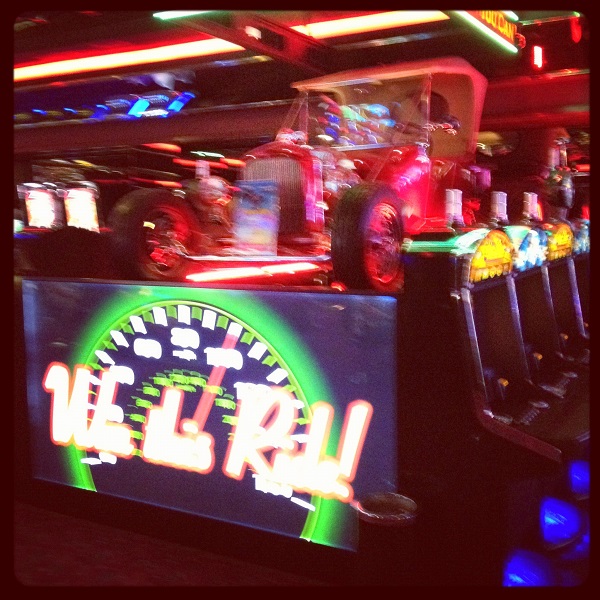 Casino Royale Las Vegas is now known for more than low table minimums, $1.99 footlong hot dogs and $1 Michelob Lights. If it’s your lucky day, when you plunk a few pennies in the slots there you could come home with a T-Bucket hot rod! And not just some T-Bucket they picked up off Craigslist, but one of a pair built for the Casino Royale Las Vegas by Spirit Industries. Pardon my blurry cell phone photos, but the dim casino lighting and trying to juggle a drink at the same time didn’t produce such hot results — but you get the idea. It so happens that I was in Vegas two Summers ago attending a trade show and when I was strolling the Strip to see what’s new I stopped dead in my tracks when I saw one of the two beautiful Spirit T-Buckets parked in front of the casino adjacent to the sidewalk — hard to miss. Of course, the T-Bucket had its intended effect because I was happy to escape the 100+ degree August weather to some air conditioned comfort and liquid refreshment. Once inside the Casino Royale, after adjusting to the dark environs I quickly sighted the other Spirit T-Bucket prominently displayed above a group of penny slots. Finding the correct machine to play to win the T, I fed in my $20 bill and was surprised how quickly it was exhausted. Hey, at a penny a pull you’ve got to go for all the paylines if you’re trying to win the big one! Needless to say, I didn’t drive home in a new T-Bucket. I walked away back into the sweltering Las Vegas heat. But, it was pretty darn exciting sitting in front of the slot machine, pulling the lever (not really, I used the button) and waiting for the results with all the enthusiasm of a five-year-old hoping for a gumball machine prize.

In case you’re wondering, the Casino Royale Las Vegas still has the two T-Buckets. They haven’t been won yet — so there’s still hope for you! By the way, the above Spirit Industries video about the T-Buckets is from February, 2010. Pretty long odds, but still exciting.