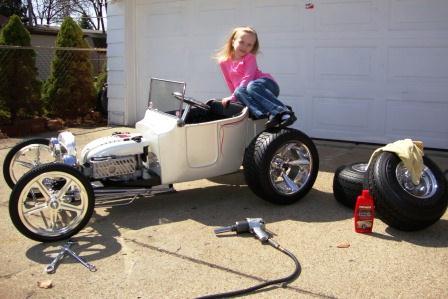 Scott Zimmerman has a lifelong passion for the hot rod and custom car scene and fortunately his wife, Debbie, shares that interest. So it wasn’t too surprising that even before their daughter, Ashley, was born they built her a stroller in the image of a 1937 Ford Boyd Coddington Smoothster. That way, they could continue their regular outings to car shows with their baby daughter who would also be riding in style. As Ashley grew out of toddlerhood and the stroller, Scott, Debbie and a very supportive crew of friends took the next logical step: a motorized mini T-Bucket, which not only allowed daughter Ashley to be more actively involved in the family car show outings, but also to be a frequent participant in those shows. Although Ashley’s T-Bucket is tiny, when it comes to detail it’s huge. Couple that with Ashley’s outgoing personality, her constant cleaning and polishing of her bucket, as well as her knowledge of what it’s all about and a loyal following has developed. She’s already appeared numerous times on television in reference to the Detroit Woodward Avenue Cruise and has been covered in newspapers and magazines. Ashley has even attracted a growing and prestigious group of sponsors, such as the Mothers team and Chip Foose as seen in the above photo. You’ll also note in the photo that her T-Bucket is displayed on a set of Race Ramps, another of her sponsors. While the sponsors play an important role, Ashley’s fine little T-Bucket wouldn’t exist if it were not for her talented build crew pictured above. Between them, anything’s possible. For example: Starting with a less-than-perfect mini fiberglass T-Bucket body, the crew set about correcting its flaws and ended up remolding the nicely smoothed T body coated in white pearl paint with complementary pinstripes that now graces Ashley’s ride. The body features a nicely chromed custom windshield frame and the rear features custom teardrop tail lights. It’s all dropped onto a precisely downscaled T-Bucket chassis that’s powered by a 6.5 hp Briggs & Stratton engine driving a 5-speed Tecumseh transaxle, with rear disc brakes, and capable of a top speed of 40 mph. And you just can’t help but notice the terrific looking front and rear wheel and tire combo. Those super looking wheels are custom milled and flash plated by sponsor, Fairway Alloys. From the front, you can see the beautifully fabricated and chromed dropped front axle, transverse leaf spring, tie rod, drag link and radius rods that lend the look of T-Bucket hot rod authenticity. Closer up, you can view the fiberglass grille shell, the suicide axle spring perch, the specially fabricated headlight stands and chromed headlights along with the custom friction shocks for which Scott and Ashley give thanks to R Creations. The tiny interior is as detailed as the rest of this T, starting with a billet aluminum dashboard made by long-time friends Randy and George, which features custom gauges by sponsor, Classic Instruments. The interior also features a custom billet steering wheel and polished column, both of which are nicely complemented by the cool downsized pedals made by sponsor, Lokar Performance Products.

This mini T-Bucket has become a great vehicle (pun intended) for family togetherness. Ashley is now lining up a nice schedule of shows to attend in 2011 and you can learn more about Ashley, where she’ll be next and her sponsors on her website, www.AshleyDesigns.org. And if you’re a supplier to the hot rod and custom car market who’d like to maximize exposure at high visibility events with a truly unique spokesperson who gets lots of recognition and attention, then you’ll want to consider joining some of the other name organizations as one of Ashley’s sponsors. I think you’ll find the return on investment pretty dramatic.

6 thoughts on “The family that plays together with a T-Bucket, stays together”