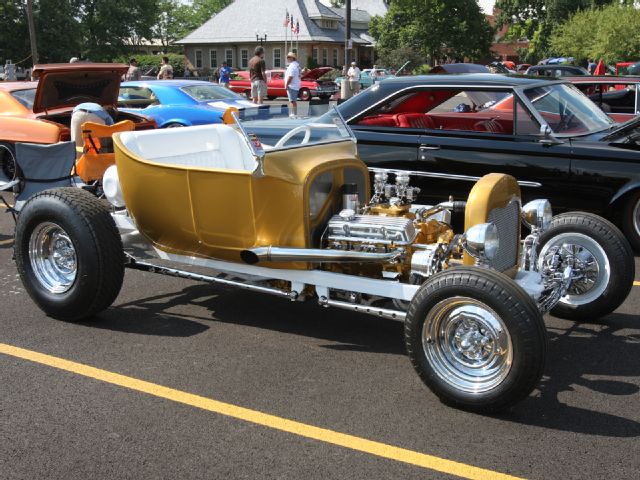 I get excited whenever T-Buckets are feature cars in one of the major hot rod magazines. The reason being that there have been periods when T-Buckets we just not to be found in the popular mags. So, if you love T-Buckets like I do, then run out to purchase the December 2013 issue of STREET RODDER magazine. You’ll be glad you did. The first thing I do when I get a new magazine is to flip to the Table of Contents– and, in this issue, what a treat that is! The two-page image is of an absolutely beautiful gold T-Bucket owned by the father and son team of Mike and Lane Pair and built by Vini’s Hot Rods in their Alabaster, Alabama home town. This too cool T-Bucket is featured in four pages photographed and written by Senior Editor, Eric Geisert, who provides consistently great T-Bucket coverage. Vini’s craftsmanship on the Pair’s impeccable T-Bucket earned a STREET RODDER Top 100 Award at the Goodguys event in Columbus this Summer. To someone who’s not a T-Bucket aficionado, this particular bucket might look like no big deal. But, when you review the photos in the magazine and read Geisert’s commentary you realize the many unique, tasteful details that make this T-Bucket a real winner. And for me, it triggered memories. You see, back in 1996 the late Gray Baskerville did a terrific piece in Hot Rod magazine about a low budget T-Bucket built by a young man named David Gadberry. That article and that car rekindled my lifelong interest in T-Buckets and a few years ago I did a blog post about The Gadberry “Low Bucket”.

Take a look at the Gadberry T-Bucket and compare it to the Pair’s T-Bucket of today and you’ll see some very strong similarities. For example, the unchanneled body, the wishbone suspensions, small block Chevy motivation, steel wheels with conservative rubber, the non-T grille shell, and the “bobtail” T look which features the fuel tank in back of the bucket, rather than a more typical pickup bed or a turtle deck. To me, it’s almost like young David Gadberry saved up and finished his “Low Bucket” with the paint, chrome, upholstery and other niceties that were unobtainable at an early age. No, the two T-Buckets are not related, but to me the similarities are uncanny. After checking out your own copy of Street Rodder, leave a comment to let us know what you think.

P.S. My infatuation with Gadberry’s T-Bucket isn’t over yet. Stay tuned and I’ll be featuring much more about that low budget bucket.

1 thought on “T-Buckets a Pair – But Different Suits”