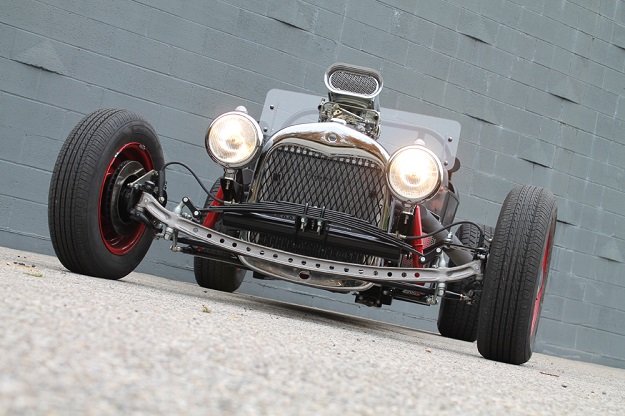 With a title like that, it helps to start things off with some substantiation, so take a quick look at this 35 second video and then we’ll tell you more.

Back in 2011, we did a series of very popular posts on NEHR Speedcraft’s T-Bucket “Hot Rod” in a Box kits. Today, NEHR has evolved into Detroit Speedcraft and they’ve taken their T-Bucket kit building up a few notches with their new Super-Performance T-Bucket. Dave Nedock and Tom Kuhr of Detroit Speedcraft noticed that more of their T-Bucket customers were looking for not only a safe, dependable ride that looked good, but also one that had really dramatic performance — and they responded. While their T-Bucket in a Box kit is a roller that sells for $14,545, they also produce a complete turnkey T-Bucket with new 350 Chevy crate engine, along with Turbo 350 automatic, 4 barrel intake, and headers ready to drive away for $24,900 (which is pretty nice compared to similar at that price point where you have to supply your own engine and transmission). With a 290+ HP crate engine and weighing only 1850 pounds their regular complete T-Bucket has great performance! That became the basis for the new Super-Performance T-Bucket when a customer in California was looking for something more that would really produce that strong kick in the tail. By the way, when a guy in California does his T-Bucket research and ends up having his built in the all the way across country in Michigan, that’s quite an endorsement! As a point of reference, Dave Nedock is a former Ford engineer whose hot rod exploits have included Funny Cars and Fuel Altereds, so Dave has a good handle on what it takes for performance. Take a look at the video below to see that the proof is in the pudding. It so happened the Detroit Speedcraft guys rented Milan Dragway for a day and invited a few customers. One of them drove his T 150 miles to the drag strip, laid down several runs with a best of 11.78 at 116 mph, drove 150 miles back home and picked up his wife to go out to a cruise that night. Talk about versatility! So, how does Detroit Speedcraft engineer a Super-Performance T-Bucket? Well, they start with their standard complete T-Bucket and replace the 4-barrel on an aluminum intake with a tunnel ram fed by a pair of side-mounted double-pumper Holley carbs. Then, Dave works some real magic by replacing the crate motor cam with a grind that makes lots of torque and has a great whap-whap sound. It has modest lift, though, so there’s no need for frequent valve spring replacement and being hydraulic you don’t have to worry with resetting valve lash. By the way, this is all done still using regular fuel. The next ingredient is upgrading to a 700R4 automatic converted to fully manual shift operation with a higher stall torque converter. And the rear end gear is a conservative 3.42:1, which goes well with the tranny’s 3.05:1 first gear. Their rear end design features long ladder bars to avoid harshness in the ride, but also serve well from a traction standpoint. Polyurethane bushings are used instead of rubber to further enhance rear suspension performance. By design, the Detroit Speedcraft T-Bucket’s wheelbase is longer than most at 106″ and the front axle is 12″ in front of the engine; making the engine almost mid-ship and giving very good front-to-back weight distribution of 52/48 for a T-Bucket. With the resulting vehicle dynamic response with 350+ HP and a weight of 1850 lbs. wet, the Detroit Speedcraft Super-Performance T-Bucket really is in the “Cobra Killer” category. Yet, you can still drive 1000 miles and enjoy it. Talk about bang for the buck! Although the Super-Performance T-Bucket is not built as a race car, it does come with a 4-point rollbar. With the locking converter in overdrive on the highway the engine’s turning only 2100 rpm at 80 mph with just two fingers resting on top of the steering wheel as you pass the slow movers in the right hand lane. At 100 mph, it’s just smooth driving. Here’s a nice one-minute video of Geoff “Skullk” Sculley’s Super-Performance T-Bucket doing some of the things it does best.

I could go on and on about the Detroit Speedcraft Super-Performance T-Bucket because I’ve spent a lot of time talking with Dave and Tom about their fascinating work — but you can get the full story at their website, www.DetroitSpeedcraft.com. Plus, they have a pretty terrific sale now going on. Dave likes to say that “if you drive one, you’ll buy it.”