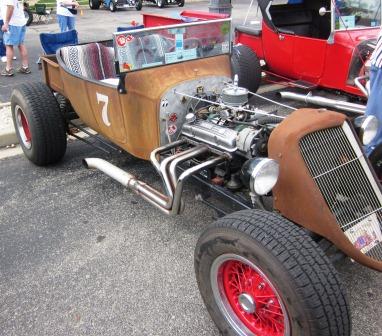 Todd Mullins drove all the way from Bartlett, TN to Dayton, OH for the 2011 NTBA T Bucket Alliance Nationals in his more-fun-to-the-mile T-Bucket known as Kletus. That’s a 500+ mile one-way trip — and, no, it’s not a rat rod. Sure, Todd’s bucket has that rusty rat rod look (and the rust is real, having been painted on the fiberglass body) but at heart there’s some real sophistication in this bucket that one just doesn’t notice because it’s a work in progress and Todd’s having fun doing it at his own pace and on his own terms. Todd’s had this Spirit Industries-based T-Bucket for quite a few years and has driven it to many of the T-Bucket Nationals events so it’s easily taken for granted, but really deserves some closer inspection. For dependability, Todd runs a “bone stock SBC with no high performance parts of any sort.” And any T-Bucket owner will tell you that’s more than enough for plenty of thrills. Todd plays harder than most, and it’s still a very dependable ride. Of course, that ’34 style grille shell lets plenty of air in to the radiator, which is helped further by the electric fan so that’s it’s just as comfortable on those slow-speed hot summer cruises. It looks relatively clean now, but Todd was the recipient of the “Most Bugs on Windshield” award at the 2008 T Bucket Alliance Nationals in Springfield, IL, where his car was also highlighted in Street Rodder magazine’s coverage of the event. From the rear, you’ll notice that Todd’s T has disc brakes all the way around, which is a good thing to have when it’s on a track somewhere running up over the century mark. As for the number 7 on the door, that could be interpreted a number of ways but the most appropriate is a tip of the hat to a famous Tennessean named Jack. To me, the red wire wheels are perfect for this car and they keep it looking rough around the edges, while it’s really smooth underneath. I guess you could call it a sleeper of sorts. For the T Bucket Alliance Dayton trip, Todd came fully loaded and this view doesn’t even take into consideration clothes and camera equipment. To me, Todd Mullins’ T-Bucket is the epitome of hot rod fun: distinctive looking, dependable and exciting to drive — all on a budget.

We know you’ll want to see more “up close and personal” of Todd Mullins’ T-Bucket, “Kletus”, so we have this nice 1 min. 23 sec. video waiting for you.

You know you’ll be kicking yourself if you don’t make it to this year’s T Bucket Alliance Nationals in Green Bay, Wisconsin, so make plans now to be there. All the info is here>